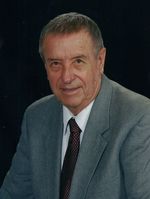 Willis R. Ziese, a resident of Bloomington for the past 25 years, passed away October 1, 2015 at the age of 84. Willis was born November 15, 1930. He met and married the love of his life, Jeanne Wahl, in 1950.
At the heart of his career path was a passion for flying. He worked as an air traffic controller; a private pilot for Dow Corning, and an inspector for the Federal Aviation Administration for 25 years. Following his retirement from the FAA in 1994, he took other aspiring pilots under his wing as a private instructor.
In addition to flying, Willis loved sailing, fishing, animals, and woodworking, but his faith in God and devotion to his family were foremost in his life.
He is survived by his wife Jeanne; his daughter and son-in-law, Colleen and Stan Burt of Carmel; his daughter, Christine Pingleton of Pendleton; seven grandchildren; and two great-grandchildren.
Visitation will be held from 1 to 3 p.m. followed by a memorial service at 3 p.m. on Tuesday, October 6, 2015 in the Chapel of Sherwood Oaks Christian Church, please enter from Door 20.
Contributions may be made to the IU Health Hospice House in his memory.