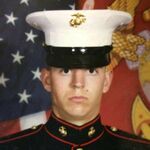 Justin Noah Lampkins, 25, of Bloomington died on Sunday April 23, 2017 at IU Health Bedford Hospital. Justin was born August 29, 1991 in Bloomington and was the son of Eric and Cindy (Kern) Lampkins. Justin graduated from Bloomington High School North in 2010. He joined the Marines in 2011 and was Honorably Discharged in 2015. He was a 10 year 4-H member, and was a member of the High School Rodeo where he rode bulls and broncs.
Survivors include his parents Eric and Cindy Lampkins of Bloomington, sister and brother-in-law Alyssa and Erick Stahl of Bloomington,and their children, Emma, Ethan and Emry, grandparents John and Susan Lampkins and Bob and Rose Kern of Bloomington and his former wife Karissah Scherschel of Bloomington.
Justin was preceded in death by a sister Ashley Nicole Lampkins.
Visitation for Justin will be from 4-8 pm Friday April 28, 2017 at The Funeral Chapel of Powell and Deckard 3000 E. Third St. Bloomington.
Services will be 11:00 am Saturday April 29, 2017 at The Funeral Chapel. Burial will follow at Clear Creek with the Veteran’s Honor Guard having Military Rites.
In lieu of flowers donations may be given to The Funeral Chapel to help with funeral expenses.

US Marine Corps
The insignias listed here may be subject to copyright and / or trademarked. Those copyrights and trademarks are owned by the respective organizations.
Printable
Share on Facebook
VFMC Indiana FDA National Funeral Directors Associations Selected Independent Funeral Homes - Member by Invitation
Obituaries
Why Come to Us?
Funeral Planning
Grief & Healing
Help & Guidance
Flowers