In Memory of
Joseph P. "Joe"
Zonkel
1939 - 2017
Click above to light a memorial candle.
Memorial Candle Tribute From
The Funeral Chapel
"We are honored to provide this Book of Memories to the family."
View full message >>>
Send Flowers
Menu 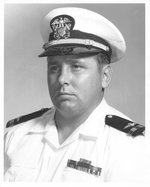 Joseph Page (Joe) Zonkel, 78
February 19, 1939 – September 8, 2017
Joseph P. (Joe) Zonkel passed away on September 8, 2017 at the Hospice House in Bloomington, IN surrounded by his loving family. He joined the staff of the Supreme Commander.
Joe was born February 19, 1939 in Kewanee, Illinois. The son of Rudolph Joseph and Lula Bernice (Deskin) Zonkel, he grew up in Kewanee and attended Wethersfield Community Schools. He was a standout athlete in football, baseball and basketball. He graduated from Wethersfield High School and attended Lincoln Christian College before enlisting in the US Navy in January 1960. He retired from the Navy in February 1984 attaining the rank of Chief Warrant Officer W3. After retiring from the Navy, he was employed by VSE Corp. in Alexandria, VA as a Logistics Management Specialist.
In July 1988, Joe was hired by Comarco, Inc. and took up residence in Bloomington, Indiana. He worked as a Senior Logistics Management Specialist supporting Crane Naval Surface Warfare Center. After retirement from Comarco, he was an associate at Sam’s Club before fully retiring in 2005.
Joe was very proud of his service to the United States while in the Navy during the Cold War era, Vietnam war, and early Middle East crisis (Iran Hostage & Lebanon). His duties took him to many foreign countries, many of which were dangerous.
He was a member of American Legion Post 18, and Veterans of Foreign Wars Post 604 in Bloomington, IN; and a member (MM) of the Olongapo, Republic of Philippines Lincoln Masonic Lodge.
An avid sports fan, he was a diehard Chicago Cubs and Bears fan. He enjoyed bowling and fishing. He spent his later years enjoying his grandsons playing baseball, ice hockey, and motocross racing; always coaching and encouraging them.
Joe was blessed with a beautiful tenor singing voice. He was a featured soloist with First Christian Church Choir of Kewanee, IL, a lead tenor in an Illinois State Champion Boys Quartet while attending Wethersfield High School and he was a member of the US Naval Training Command Great Lakes famed Blue Jackets Choir.
Joe is survived by the love of his life, his wife of 49 years Julieta (Brabante) of Manila, Philippines. Daughter Christine Zonkel of Bloomington, IN; son Joe Paul Zonkel (Emily Harlan) of Goose Creek, SC; daughter Mary Rose Pitman (Jeremy) of Bedford, IN; grandsons Ronin Pierce Harlan-Zonkel, Griffin Pace Harlan-Zonkel, Silas Pike Harlan-Zonkel, Kylan Joseph Pitman, Asa Reid Pitman; brother Alan Zonkel (Betty) of San Diego, CA; and sister Raele Sue Moore (Randy) of LeClaire, IA; and numerous cousins, nieces and nephews.
He is preceded in death by his parents Rudolph and Bernice and sister Pauline Ann Gustaitis.
Services will be held at 10:00 am Tuesday September 12, 2017 at St. Charles Borromeo Catholic Church 2222 E. Third St. Bloomington. Burial will follow at Valhalla Memory Gardens where the Veteran's Honor Guard will have military rites.
Visitation will be from 4-8 pm on Monday September 11, 2017 at The Funeral Chapel of Powell and Deckard 3000 E. Third St. Bloomington.
The family would like to express our deepest thanks and gratitude to Fresenius Medical Care, IU Health Bloomington Hospital Palliative Care Team, and IU Health Bloomington Hospice House.
In lieu of flowers, donations may be made in Joe’s memory to the American Diabetes Association, National Kidney Foundation or the Monroe County Animal Shelter, Bloomington, IN.

VFW
The insignias listed here may be subject to copyright and / or trademarked. Those copyrights and trademarks are owned by the respective organizations.
Printable
Share on Facebook
VFMC Indiana FDA National Funeral Directors Associations Selected Independent Funeral Homes - Member by Invitation
Obituaries
Why Come to Us?
Funeral Planning
Grief & Healing
Help & Guidance
Flowers