In Memory of
Clarissa Loucks
Oehmich
1917 - 2017
Click above to light a memorial candle. 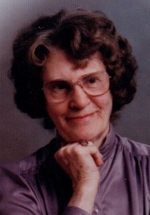 Clarissa Loucks Oehmich, 100, of Bloomington passed away Friday, December 15, 2017 at her residence.
Born, January 18, 1917 in Chicago, Illinois, she was the daughter of Frank and Anna (Laue) Loucks.
Clarissa was an Artist, Author, and avid nature and animal lover.
She lived in northern Indiana from 1928 until 1986 when she moved to Bloomington.
One of her earliest memories was of the Spanish Flu of 1918-1919 which took her mother in 1918.
Survivors include one son, Arthur Oehmich and his wife Melissa, two daughters, Alice Oehmich, and Elaine Oehmich, and one step-grandson, Patrick Campbell all of Bloomington.
She was preceded in death by her husband, Carl Oehmich in 1979, one sister, in 1922, her mother, and her father in 1969.
Visitation will be 1:00-3:00pm Wednesday, December 20, 2017 at The Funeral Chapel of Powell and Deckard, 3000 E. Third St. in Bloomington.
Funeral services will be 3:00pm at The Funeral Chapel with Pastor David Norris officiating. Burial will follow at Bethel Cemetery.
Memorial contributions may be made to Southern Care Hospice, 1923 S. Liberty Dr. Bloomington, IN 47403.