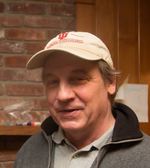 Bruce Edwin Bundy February 23, 1956 - December 24, 2017. Bruce was born in Bloomington, Indiana, and attended Bloomington High School South. “Howling Bruce,” brother, counselor, and friend, passed away suddenly on Christmas Eve surrounded by a group of his oldest friends. He graduated from Indiana University and dedicated his life to helping others. For many years he volunteered through New Leaf, New Life as a recovery counselor for inmates at the Monroe County Jail. He was also a tutor for the VITAL literacy program at the Monroe County Public Library and a frequent supporter of the Shalom Community Center among many other local organizations.
Bruce was one of Bloomington’s original environmental activists and co-founded the anti-nuclear Bloomington Paddlewheel Alliance in 1979, which succeeded in stopping the Marble Hill Nuclear Power Plant in 1984. In the 1980s he worked with the Indiana Public Interest Research Group (InPIRG), which defeated the construction of an ill-conceived PCB incinerator in Monroe County. As a member of the U.S. Coast Guard, he was part of a team that rescued surviving crew from a ship sinking off the New Jersey coastline.
Bruce was active as a cave explorer and in the Monroe County model aviation club. He was a writer and currently working on a caving article for publication. He was a naturalist and photographer who loved the outdoors and travel. As a child he lived two years in Thailand, where his father, a science educator, had a teaching position.
He was preceded in death by his father, Charles Boyd Bundy, and mother, Jean Ordung Bundy. He is survived by brothers Boyd (Eliane) and Barry (Dianna); nieces Shannon Brown and Allison (Shannon) Thieme; special friend Hermine Cohen; and his beloved dog Ty.
Bruce is being laid to rest at Clear Creek Cemetery in Bloomington, IN. A celebration of life will be held at Baha’i Faith Community Center on Saturday, December 30, 2017, at 2 pm.
One of Bruce’s friends of many years, Professor John Isbell, who knew he loved to talk to people, commented, “The world made sense to Bruce and filled him with delight when he spoke of its oddities, its quirks and foibles….But the heart that pushed blood through his arteries and filled the folks who met him with his presence gave out at the last.”
Bruce joined the Baha’i Faith in 1998 after studying its teachings for ten years, a process consistent with his keen intellect and curiosity. He served on the Bloomington Baha’i Governing Assembly and was a consistent supporter of local Baha’i activities. Bruce will be remembered for love, compassion, generosity, and caring for all humanity. His qualities are embodied in the Baha’i writing:
“God's greatest gift to man is that of intellect, or understanding… (of) reason and eloquence of expression. The perfect man is both intelligent and eloquent. He has knowledge and knows how to express it.”
Contributions may be made to the Bloomington Community Kitchen or Shalom Community Center.
Arrangements are through The Funeral Chapel of Powell and Deckard, 3000 E. Third Street Bloomington, Indiana.