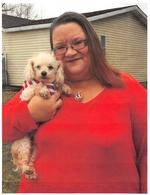 Surrounded by her children, Kara Leigh Fowler of Seymour unexpectedly passed away on Sunday, January 21, following a short illness. Kara was born on May 29, 1967 in Bloomington, Indiana to Donald and Linda Fowler (née Swafford). Kara graduated from Bloomington High School South; and Bloomington Cosmetology School. She was a member of the Seymour Christian Church.
Kara was a friend to many. She never met a stranger and welcomed everyone with a big smile and a hug. Kara was a free spirit that lived, loved, and laughed to the fullest. She made the best of all situations; and was known for being open, honest, brave, and forgiving. Kara was passionate about being Mom to her children, and Mamaw to her grandchildren. She eagerly anticipated the birth of her eighth grandchild Ariel Leigh (named for Kara) in May. She loved butterflies, and all animals, especially dogs. She trained several service dogs for those in need.
Kara is survived by her daughter Chelsey Arthur (Terence) of Seymour; son Daniel Rogers (Lacey) of Bedford; son Dillion Rogers of Bloomington; grandchildren Courtney, Lauryn, Sara, and Donnie Arthur of Seymour; and Elizabeth Rogers of Bedford; mother, Linda Fowler of Bloomington; sister Tamara Speelmon (Lance) of Chandler, AZ; nephew Drew Crohn (Natalie) of Martinsville; nephew Clayton Crohn of Gilbert, AZ; several aunts, uncles, and cousins; and her beloved poodle Abby.
Kara was preceded in death by her father Donald Fowler; granddaughter Mary Margaret Author; grandson Terence Eugene Arthur, Jr.; paternal grandparents Fred and Mary Fowler; maternal grandparents Virgil Swafford, Margaret “Dema” and Harold Jonas.
Funeral services will be held at The Funeral Chapel of Powell and Deckard, 3000 E. Third St., Bloomington, IN, on Thursday, January 25. Visitation will be held from 3:00 – 6:00 p.m. Funeral services will follow at 6:00 pm, with a private burial at a later date.