To share your memory on the wall of Ron Dyer, sign in using one of the following options:

Provide comfort for the family of Ron Dyer with a meaningful gesture of sympathy.

Print
Ron L. Dyer, 75, Indianapolis, IN, former Bloomington resident, passed away Monday, May 13, 2019 at his home surrounded by his family. Ron was born February 20, 1944 in Bloomington, IN the son of Riley and Effie (Capps) Dyer.

Ron was ret... Read More
Ron L. Dyer, 75, Indianapolis, IN, former Bloomington resident, passed away Monday, May 13, 2019 at his home surrounded by his family. Ron was born February 20, 1944 in Bloomington, IN the son of Riley and Effie (Capps) Dyer.

Ron was retired from Value City Furniture in Indianapolis, IN and manager of Blue Sky Trading Company in Bloomington, IN. He was a graduate of Bloomington High School, attended Indiana University School of Music and Los Angeles City College and was a member of the Screen Actors Guild. Ron had a wonderful sense of humor and enjoyed making people laugh.

We encourage you to share your most beloved memories of Ron here, so that the family and other loved ones can always see it. You can upload cherished photographs, or share your favorite stories, and can even comment on those shared by others.

Love, Rhonda Quintero and Mark A Anderson have sent flowers to the family of Ron L. Dyer.
Show you care by sending flowers

Posted Sep 05, 2019 at 01:46pm
I work with Ron at Repp LTD Big and Tall in Castleton.Ron always talk about his family and he was funny .RIP Ron
Comment Share
Share via:
DS

Posted May 18, 2019 at 10:04am
I’m so sorry to hear about the loss of your dear loved one. It’s very comforting to know what the Bible says about ones we’ve lost in death. Verses like Acts 24:15 are an excellent example of this: “And I have hope toward God, which hope these men also look forward to, that there is going to be a resurrection of both the righteous and the unrighteous.” Knowing God’s promise that we’ll be reunited with our loved ones who have died is a promise that I hold dear to me. (John 5:28, 29) I know God’s Word can bring you hope & comfort too.
Comment Share
Share via:
BL

Posted May 17, 2019 at 01:45pm
Ron was one of the most upbeat and happy people I ever had the pleasure of meeting. He was never too busy to help. He and Charlotte were always ideal neighbors to my parents and later became ideal ones to me. There was never any doubt about his devotion to follow Jesus' teachings and his desire to do God's will.
Comment Share
Share via:
LQ

Posted May 17, 2019 at 02:23am
To the Dyer family: Charlotte, Renee, Rachelle, Dean, and Michael- May God's comfort surround you at this difficult time.

Flowers were purchased for the family of Ron Dyer. Send Flowers 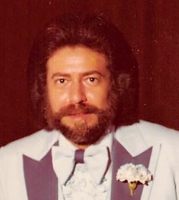