To share your memory on the wall of Michael Houshour, sign in using one of the following options:

Provide comfort for the family of Michael Houshour with a meaningful gesture of sympathy.

We encourage you to share your most beloved memories of Michael here, so that the family and other loved ones can always see it. You can upload cherished photographs, or share your favorite stories, and can even comment on those shared by others.

Brian Houshour Becky Houshour and Families Brenda, Ronda Ramsak & Family, and others have sent flowers to the family of Michael H. "Mike" Houshour.
Show you care by sending flowers

Posted Jun 04, 2019 at 08:55am
Was out of town in May. Hope time helps to heal your loss. Hearing stories about Mike from Bonnie makes me almost feel like I knew him. Wishing you hope and peace.
George
Comment Share
Share via:
GT

Posted Jun 04, 2019 at 08:55am
Was out of town in May. Hope time helps to heal your loss. Hearing stories about Mike from Bonnie makes me almost feel like I knew him. Wishing you hope and peace.
George
Comment Share
Share via:
GT

Posted Jun 04, 2019 at 08:55am
Was out of town in May. Hope time helps to heal your loss. Hearing stories about Mike from Bonnie makes me almost feel like I knew him. Wishing you hope and peace.
George
Comment Share
Share via:
BB

Posted May 24, 2019 at 07:39pm
Bonnie,
Our deepest sympathy in your great loss.
Our hearts go out to you and your family.
We wish there were something we could do or say
that would ease your pain but know in your heart
we are thinking of and praying for you and your family.

Those we love don't go away,
They walk beside us every day,
Unseen, unheard, but always near,
still loved, still missed and very dear.

Thinking of you at this time of your loss
& hoping you’ll reach out to us should you
need anything. 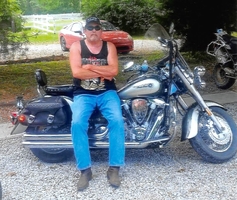