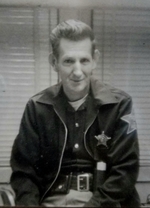 William M. "Bill" Russ, 93 of Unionville, Indiana passed away, Saturday, July 27, 2019 at IU Health Bloomington Hospital, surrounded by his family. Bill was born June 15, 1926 in Monroe County, IN, the son of the late Robert and Jennie (Brown) Russ.

Bill was a WW 2 US Army veteran, stationed in Bremen, Germany. After returning home Bill sold cars before joining the Monroe County Sheriff's Department as a Sheriff's Deputy, he retired after twenty three years of service. Bill was a loving and devoted husband, father and grandfather who could be counted on. Bill was always quick to share a kind word and will be remembered for the great stories he would tell.

Bill was a member of the New Unionville Baptist Church, American Legion, Post 18, VFW and the Elks Lodge.

Bill was preceded in death by his son, Kevin Lee Russ in 2018 and five brothers and sisters, Wilma Durnal, Ira, John and Robert Russ and Mary Bogie.