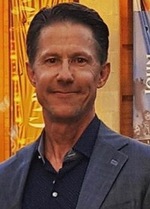 Gregory Matthew Simmons, 54, of Bloomington, passed away on Sunday, July 28, 2019, after a long battle with cancer. Greg was born in Omaha, Nebraska on April 16, 1965 to Robert and Geraldine Simmons, while his father was serving in the Air Force. They then moved back to South Bend, Indiana where Greg grew up. In his youth, he attended Holy Family School and graduated from Washington High School. He went on to earn multiple degrees from Indiana University. Greg faced adversity early in life through cancer and other chronic illness, but you would not know it based on his exceptional level of fitness and energy. Despite medical hardships, Greg lived every day to the fullest and could accomplish in one day what most people would do in a week. He was an adventurer at heart and always ready to try something new!
From his teen years, Greg developed a love of physical exercise, particularly the sport of powerlifting. He competed for decades at the highest levels of the sport, winning three International Powerlifting Federation Master’s World Championships plus multiple national and state titles. He served as a USA Powerlifting World Team coach and traveled to competitions around the world representing the United States. He was a dedicated personal trainer and athletic development coach to many local community residents and athletes across multiple sports. In addition, Greg taught courses in fitness and strength training at Indiana University and Ivy Tech Community College. Many of his athletes and students have gone on to successful careers. He was recently inducted into the Iron Pit Gym Hall of Fame and was also recognized with a Bicentennial Medal from Indiana University for his outstanding record of achievements and for bringing distinction to his community. With his quick sense of humor and zest for life, Greg had many, many friends.
Outside of sport, Greg was an avid supporter of the performing arts. He loved everything from musical theater to alternative rock. Greg recently served as a board member for Cardinal Stage where he attended and supported many productions. He loved live music festivals and bonding with his daughter at rock concerts. Greg also had a lifelong passion for custom cars, having restored a 1968 Camaro in his early days and showing it on the circuit. He continued that interest in later years by attending car shows, driving race cars, and enjoying his 50th anniversary edition “Hot Wheels” Camaro daily. Truly, his interests were so diverse that it is impossible to list them all.
His greatest love was spending time with his wife, Susan, and daughter, McKenna. They loved to travel as a family to destinations near and far. They were frequent cruisers on Disney ships and made great memories on trips throughout the Caribbean and beyond. Greg is survived by his wife, Susan (Crowe) Simmons, daughter, McKenna Simmons, father, Robert Simmons, and nieces and nephews, Mia, Megan, Matthew, and Mitchell Simmons, along with extended family. He was preceded in death by his brother, Ronald Simmons and mother, Geraldine Simmons.

We invite Greg's friends and family to celebrate a life well lived at a gathering at Woolery Mill in Bloomington, Indiana, on Sunday, September 22nd, from 4-7 pm. We will share memories and enjoy food, drink, and dancing. Casual attire is appropriate. Please consider wearing your Simmons Strong T-shirt if you have one. If you plan to attend, please RSVP via Facebook.

For those who would still like to purchase a T-shirt to support the family, they are available at: https://teespring.com/simmons-strong.


To honor his friendship and memory, please consider a contribution to an educational fund set up for Greg’s daughter or a donation to support Cardinal Stage.
You are invited to share a thought or memory or leave a photo of Greg for his family at www.thefuneralchapel.net