To share your memory on the wall of William Kelsey, sign in using one of the following options:

We encourage you to share your most beloved memories of William here, so that the family and other loved ones can always see it. You can upload cherished photographs, or share your favorite stories, and can even comment on those shared by others.

Posted Sep 04, 2019 at 11:50am
Dear Linda, Marybeth, and family......I am so saddened to hear of Mike's passing. He and I met in the summer of '63 and were roommates in the fall semester--the beginning of a long friendship. Even though we had not met face-to-face for 45 years of so, when I found him on Facebook our conversation picked up as if the interval was a few days. I will never forget our bull sessions nor our bridge games. He challenged me intellectually, politically, and personally; he was a real friend. I hope you all take comfort in knowing that his memory lives on as does his positive influence on this world.

Posted Aug 21, 2019 at 12:19pm
Mike and I were part of a group who used have brunch together every week. I was always impressed by Mike's knowledge, intelligence and good nature. He kept going in spite of his medical problems and disabilities. I'll miss him a lot.
Patrick Inglefield

Posted Aug 19, 2019 at 09:51pm
Col. Mike Kelsey was a man I counted as a friend. He was a kind, generous, and forgiving mentor as I made my way into community radio. My show,Roots For Breakfast, was followed by his juggernaut classic Old Time Train 45. Every tape I made of my show I wouldn't stop until I heard his introduction with that fiddle mimicking a steam engine. For my love of roots music, I owe the Col. so much. I remember he'd quietly walk in the Firehouse studio with his canvas shopping bag, set up his show, comment on my set, ask about my newlywed wife, my new born daughters, and never stopped checking in. He was a good man and a role model.
It's a bitter disappointment that I learned so much from his obituary that I never learned in life. I wish we could have had more conversations.
I will really miss you Mike. You were a part of Bloomington that made it my home.
Comment Share
Share via: 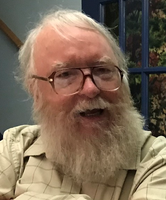