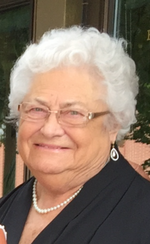 Margie Ann Temples, 87, of Bloomington, IN died Saturday, January 25, 2020 at Stonecroft Health Campus, Bloomington, IN.
Funeral services are to be held Wednesday, January 29, 2020 at 12:30 PM at the Funeral Chapel, 3000 E. 3rd St., Bloomington, IN. Visitation will be held 2 hours prior to the service. Graveside services will be 3:00 pm CST on Wednesday at Oakland Cemetery in Oakland, Illinois.
Survivors include one son, Gerald (Angie) Temples of Mattoon; 1 daughter Cheryl Arnold (friend Mark Sparks) of Bloomington, IN; 6 grandchildren, Kami (Brett) Hefner of Effingham, IL; Wes (Shea) Temples of Bloomington, IL; Mitch Arnold of Los Angeles, CA; Matthew (Diane) Arnold of Traverse City, MI; Luke (Abby) Arnold of Greenwood, IN; 10 great-grandchildren.
She was preceded in death by her parents, 4 sisters, and 1 brother, and son-in-law, Stuart Arnold.
Mrs. Temples was born on October 16, 1932 in Oakland, IL, the daughter of Alvin and Leona Arney Dittamore. She was united in marriage to Glenn Temples on June 11, 1950; he preceded her in death on January 10, 1996.
She graduated from Oakland High School in 1950. She and Glenn were Homecoming King & Queen their senior year and were high school sweethearts. Together they managed a farming and livestock operation in the Oakland area for over 50 years. She worked as a secretary at Hindsboro and Oakland schools, Tabo Grain Company, and as a Food Service Administrator at Eastern Illinois University for over 20 years.
She was a member of the Oakland Methodist Church, traveled with Happy Travelers of Bedford, IN, and was a member of the Monroe County American Legion where she socialized and danced with friends.
Memorials are suggested to the Oakland Methodist Church, #13 East Washington Street, Oakland, IL 61943; American Legion Auxillary, 1800 W. 3rd St., Bloomington, IN 47403.