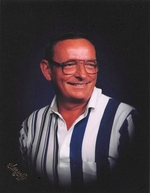 
Alfred was born on December 6th, 1946 in Monroe County, Indiana, the son of Charles Ross and Dorothy (Floyd) Wilson. He married Alice A. (Flynn) Wilson on February 16th, 1963; she survives.

Alfred lived in Spencer, Indiana most of his life. He owned and operated his own business, Wilson Seamless Guttering, for more than 40 years, working on homes and businesses, primarily in Owen and Monroe counties.

Visitation services will be at The Funeral Chapel, Powell and Deckard, 3000 E. 3rd St., Bloomington, IN on Wednesday, January 29th, starting at 5pm until 7pm. Services to follow in chapel at 7pm.

In remembrance of Alfred, the family would like any donations to be sent to the IU Hospice House.