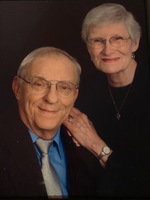 Emerson “Mickey” Klein died peacefully in his sleep on Tuesday, January 28, 2020. Mickey, as he was known by friends, was a lifelong Cubs fan and was happy that he got to see them win the World Series. He loved talking to people wherever he met them and always had a smile on his face.
He was born May 7, 1935 in Cleveland Heights, Ohio and moved to Chicago as a young boy. He and his brother Miles would ride the trains around town for fun as kids. He was a pitcher in high school, a skill that has been passed down to two of his grandchildren, Will and Sam who pitch in college.
He attended the University of Illinois where he met his future wife, Margaret “Peggy” Caskey and he fell in love with her on their first date. Upon graduation he married Peggy and enlisted with the Army and scored at the top of his broadcasting class, so he was able to choose his deployment and chose Germany where he was a D.J. for the Armed Forces Network.
Upon leaving the Army, Mickey, Peggy and newborn son Jim returned to Champaign-Urbana, IL where he worked for WILL TV as a director.
In 1967, Mickey, Peggy, Jim and new sons Bill and Tom moved to Bloomington, Indiana where Mickey worked for WTIU-TV as on air talent, Director and Producer for the remainder of his career. Mickey was proud of his first major production – The Beaux Arts Trio. He hosted the weekly Big Red Football show and was responsible for bringing IU Soccer to TV. He directed shows featuring the Drum Corps International and produced the documentary on Monroe County History – The Spirit of Monroe County.
Mickey enjoyed refereeing baseball, softball, football, basketball and tried volleyball. He was inducted in to the Amateur Softball Association (ASA) Hall of Fame. He and son Bill refereed the first IU Midnight Madness basketball game.
He was a 50 year member of the First Presbyterian Church in Bloomington where he and Peggy met many lifelong friends. The Church was a focal point of their life.
Mickey is survived by his brother Miles; sons, Jim, Bill and Tom (Lexi); grandchildren, Mike (Jessi), Krissy, Will, Sam, Molly, Mats, Evan, Cameron and Grace; great grandchildren, Cash and Oakley.
He was preceded in death by his wife Peggy.
Mickey’s family will receive friends on Friday, January 31, 2020 from 5-7 pm at First Presbyterian Church 221 East 6th Street Bloomington.
A Celebration of Mickey’s life will be at 1 pm Saturday, February 1, 2020 at First Presbyterian Church followed by a reception at Lyman Hall in the church.
In lieu of flowers contributions may be given to the First Presbyterian Church, 221 East 6th Street Bloomington, IN 47408.