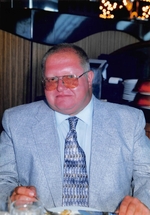 Dallas R. "Dally" Swafford Jr., age 67 passed away Thursday February 27, 2020. Dallas was born in Bloomington, Indiana January 31, 1953 to Madonna and Dallas Swafford Sr. He attended Bloomington High School, he then joined the army in July of 1972 where he served until he was honorably discharged in 1976. He spent the majority of his deployment in Germany. Dally went on to spend several years working with Madonna at the Flower Patch. He then worked at Vectren until retirement. Dallas was an active member of the American Legion, Moose Lodge, and Amvets where he was a well loved patron.
Dallas was a man that could light up a room and be the life of a party. He had a big heart and would do anything for anybody and loved spending time with his vast groups of friends, family, and his grandbabies. He loved his dog Tucker who was his whole world. He enjoyed golf. He worked hard maintaining his flower beds after his moms passing and took great pride in his yard.
Dallas was preceded in death by both parents, Madonna and Dallas Sr, his brother in law Tom Tilley, and his beloved dog Houston. Survivors include his sister Linda Tilley, his dog Tucker, and the many lucky people whom his life has touched.
Come celebrate his life and share your memories. Visitation will be Monday, March 2nd from 4-8pm and Tuesday, March 3rd from 10-11 at The Funeral Chapel of Powell and Deckard, 3000 E. Third St. Bloomington, Indiana. Services will immediately follow at 11am at The Funeral Chapel with burial at Valhalla Memory Gardens.