To share your memory on the wall of Gerald Lynn "Jerry" Spore, sign in using one of the following options:

Provide comfort for the family of Gerald Lynn "Jerry" Spore with a meaningful gesture of sympathy.

Jerry discovered Bloomington and IU through a high school Latin contest. After graduating from Owensville High School he joined the army, serving at Fort Knox. After the army, Jerry enrolled at Indiana University. The Marching 100 needed a glockenspiel player, so he quickly adapted his piano and accordion skills. Jerry joined the Pi Kappa Alpha fraternity, and received his accounting degree in three years. His most important accomplishment at IU was meeting Dorothy Catherine (Dot) Moore. They were married on June 4th, 1950 and celebrated 65 years of marriage. She preceded him in death in 2015.

Dot and Jerry were 40+ year members of Mt. Gilead Christian Church where he served as Treasurer, Pianist, Organist and Choir Director over the years. When Mt. Gilead closed, he was happy to just be a member of First Christian Church. His long career as an accountant at Roger’s Group, Tarzian’s and retiring from IU left him knowing seemingly everyone in Bloomington.

Jerry developed a passion for genealogy that became a 50 year research project. He wrote the “Spore Book” in the 70s. When the technology became available to upload his database to Ancestry.com, he had records of over 10,000 relationships. After a joyous reunion with his wife, son and parents, he will finally get to hear the stories from his immigrant ancestors.

Family meant the world to Dot and Jerry. They had three children, Jennifer Catherine (Spore) Mullis, James Lynn Spore (Jennifer), who survive them, Daniel Richard Spore (Janet) who preceded him in death in 2017. On holidays, birthdays, random cookouts the house was full. 4-H, scouts, sporting events took most of their time when not at work. The last few years living at Gentry Park brought him some wonderful new friends, lots of time talk and a few more performances at the piano.

We encourage you to share your most beloved memories of Gerald Lynn "Jerry" here, so that the family and other loved ones can always see it. You can upload cherished photographs, or share your favorite stories, and can even comment on those shared by others.

Posted May 11, 2020 at 02:19pm
To all of Jerry's family, We have so many memories of "Dot and Jerry"....because they were always mentioned in the same sentence. Craig more than I as he grew up on Janet Dr and considered Dot a second mom to all of the kiddos in the neighborhood. We raised our kids on Janet Dr and going to the Spores for fireworks and trick or treat.....they were always a wonderful constant on the street and our kids have so many wonderful memories as do we. Jerry always had a story to tell and our kids loved to hear them. He is now with his beloved Dot and wonderful son Dan. Please know how sorry we are for your loss and we know what a void that brings....especially in these challenging times. Our thoughts and prayers are with you all and may God be with you and bring you peace.
Love,
The Pearsons
Comment Share
Share via:
TW

Posted May 08, 2020 at 08:07pm
We have so many fond memories of Dot and Jerry throughout the years. All the 4th of Julys at their house after the city fireworks and all the Christmas Eves when they would come to our house to be with family, are special memories. Jerry had such a wide variety of interests that he always had something exciting to talk about. He will be missed and often remembered.
-Tom & Julie Wetzel
Comment Share
Share via:
KJ

Posted May 07, 2020 at 04:31pm
Jerry told me that he loved playing trivia with my mom at Gentry Park and missed her when she passed. I'll miss seeing his smiling face there. Love, Kim Jerome.
Comment Share
Share via: 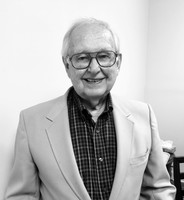