To share your memory on the wall of Curtis Dean Cox, sign in using one of the following options:

We encourage you to share your most beloved memories of Curtis Dean here, so that the family and other loved ones can always see it. You can upload cherished photographs, or share your favorite stories, and can even comment on those shared by others.

The Obituary was beautifully done. I love the photo’s you chose. They are perfect. Thank you for the kind words as well. We will miss Curtis. I let the staff know he passed away and they all were very saddened by this news. Curtis impacted a lot of lives and most likely didn’t even know it. Life is amazing that way. We all are gifts to each other. Curtis certainly was a gift to us. Thank you for all that you and Jody have done. You are both amazing ladies. If you need anything else, please let me know. I will keep you all in my prayers.
Comment Share
Share via:
JT

Posted May 27, 2020 at 06:05am
A friend of Tracy's posted this memory on facebook. Thank you Melissa Dawn Chambers Baker!

Oh dear, I am so sorry. This hits a little hard, as he took me right along with the two of you to our father daughter dance because my daddy was already gone from this life. I love you. I’m thinking of you. I’m so sorry, sweet lady! 💔
Comment Share
Share via:
JL

Posted May 26, 2020 at 10:17pm
Dear Jodi & Jackie & family, News of Curt's death (on my 75th, 5/24 birthday) came as an unsuspected shock. Thank you for sharing this with us, dear cousins. I am grateful that we had the opportunity to visit with Curt a few times, but didn't really get to know him at all; he seemed reserved & not much of a talker. I had no idea that he was in failing health, or that his wife had passed away, nor if he had any children. Losing your only brother changes the family dynamics a bit, speaking from experience after taking care of my brother John in our home from 1993-2015. John died the day after Mother's Day in 2015 from pneumonia & other health conditions. Thank you both for keeping in touch; hope to get back to Indiana again one of these next summers. You are invited to come visit us - anytime; we're 60 minutes north of the Sea-Tac airport...when there's no heavy traffic! God bless you, Shalom, & much love & hugs! Jeannine & Alan (Lanny) Lish
Comment Share
Share via:
JT

Thank you! Curt was a bit more reserved then us but get him talking about his time in the military, he would talk your ear off!! His health had struggled for quite some time, no longer in pain is a blessing. Thank you... 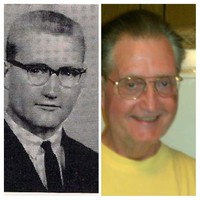