To share your memory on the wall of Lance L. Wright, sign in using one of the following options:

Provide comfort for the family by sending flowers or planting a tree in memory of Lance L. Wright

Provide comfort for the family by sending flowers or planting a tree in memory of Lance L. Wright

We encourage you to share your most beloved memories of Lance L. here, so that the family and other loved ones can always see it. You can upload cherished photographs, or share your favorite stories, and can even comment on those shared by others.

Tony & Yong Suk and DebbieGott sent flowers to the family of Lance L. Wright.
Show you care by sending flowers

Posted Aug 28, 2020 at 09:06am
Trish,
We were so saddened to here that Lance had passed away. He was a great guy and always had a smile. We will miss seeing him very much. We will be praying for you and your family. Love you, Mike and Sherry Mobley
Comment Share
Share via:
TS

Posted Aug 19, 2020 at 06:29pm
Trish our prayers are with you that the Lord will strengthen and comfort you with His Holy Spirit.

Posted Aug 19, 2020 at 06:04pm
With prayers and hugs sent to Trish and Gail! And all the family Love you all. From Debbie, Billy,Joy and Abbi Gott and Bob Bever.

Flowers were purchased for the family of Lance L. Wright. Send Flowers 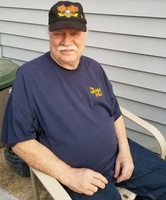