To share your memory on the wall of Jessica Jane (Cowles) Reynolds-Stoutermire, sign in using one of the following options:

We encourage you to share your most beloved memories of Jessica Jane here, so that the family and other loved ones can always see it. You can upload cherished photographs, or share your favorite stories, and can even comment on those shared by others.

Posted Oct 25, 2020 at 04:11pm
Jess always had a full face of makeup on for just going to the store. Her smile and quick funny equips made for a great day. I miss seeing that car outside. I love and will forever miss you.
Comment Share
Share via:
IP

Posted Oct 23, 2020 at 02:56pm
Jess you remember that time that you and i put all the makeup on that one guy, tied his shoes together and wrote our names on his cheek "done by mc and booboo"
Or the times that youd purposely hit that mailbox on harmony road when we passed it. How many times ive cried to you about things in our life going on, us going tanning, getting nails done. How many times we have stood together as a family for mom when she needed us. Jessie....why? You were there for me when i had my wreck the first person there for me. You told me i couldnt leave you dude. Your going to be missed by so many people man. So many people. You was loved and i am SO PROUD OF YOU JESSICA JANE COWLES. you were my go to person, my everything. The piece of my heart that left the day you did. I know your up there with daddy and kerry looking down on us. I miss you so much man. Your my angel now jess. I will make sure to make you look beautiful for your services. I can at least give you that. I love you so much middle sissy. Until we meet again.

I love you
H

I love you gf
3 Comments | Show All 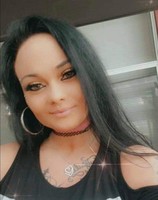