To share your memory on the wall of Violet Franks, sign in using one of the following options:

Initially they lived with Cyril’s parents in London. Cyril completed his PhD in psychology and began practicing at the Maudsley Hospital. Their children, Steven and Sharon, were born in London as Violet completed her PhD in psychology at the University of London. Cyril, restless and eager for more opportunity, moved the family to New Jersey by 1960, eventually settling in Princeton.

On the cusp of the women’s movement, Violet edited Women in Therapy: New Psychotherapies for a Changing Society. Both Violet and Cyril were active in the American Psychological Association nationally and in New Jersey. She taught as adjunct faculty at Douglas College and served as the Director of Testing for Carrier Clinic. For many years Violet easily made friends wherever she went. In their welcoming Princeton home of over 40 years, they hosted many parties and gatherings for their friends from around the world. Violet specialized in people with bi-polar parents and also those with phobias. Her approach was always behavioral and cognitive. Violet frequently traveled and gave lectures alongside her husband on most of their trips. After suffering a stroke in 2013, Violet and her husband moved to Bloomington to be closer to family. She loved taking advantage of the cultural offerings of her new home, such as going to the opera, theater, and IU women’s basketball games.

Violet’s spirit and her memory lives on in her friends and family scattered around the world. She was a profoundly compassionate soul and a model of lovingkindness. Friends and colleagues agree Violet was a seminal scholar, a wise mentor, and a merry and loyal friend. She is survived by her children Steven (Karen) Franks of Bloomington, IN and Sharrin Vernall of Auckland, New Zealand; by her five grandchildren Julia (Joshua) Needle of Henderson, NV, David Franks of Chicago, IL, Elisabeth (Brian) Anderson of Denver, CO, Emily Sage and Brendon Vernall of Auckland, New Zealand; and by one great-grandson Nathan Needle.

We encourage you to share your most beloved memories of Violet here, so that the family and other loved ones can always see it. You can upload cherished photographs, or share your favorite stories, and can even comment on those shared by others.

Guaranteed hand delivery by a local florist
AS 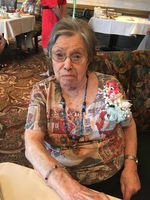