To share your memory on the wall of Betty M. Mercer, sign in using one of the following options:

Provide comfort for the family by sending flowers or planting a tree in memory of Betty M. Mercer

Provide comfort for the family by sending flowers or planting a tree in memory of Betty M. Mercer

We encourage you to share your most beloved memories of Betty M. here, so that the family and other loved ones can always see it. You can upload cherished photographs, or share your favorite stories, and can even comment on those shared by others.

Giles and Darlene sent flowers to the family of Betty M. Mercer.
Show you care by sending flowers

Flowers were purchased for the family of Betty M. Mercer. Send Flowers

Posted Nov 10, 2020 at 04:58pm
To Betty's Family,
We were her neighbors for many years and shared friendly hellos, neighborhood information as the area changed and we were always glad to help. We remember an Easter egg hunt she had in her backyard years ago and how happy the kids were. There was a bush of beautiful orange flowers in the narrow passage between our houses. Betty commented that she liked seeing our daughter's bedroom light on. After we moved, it was good to see her at church.
May you have the comfort that Jesus promises to all who mourn.
With sympathy,
Nancy and Chuck
Comment Share
Share via:
SC

Thank you Nancy and Chuck for these lovely remembrances of Betty. My sister and I were the little girls doing the Easter egg hunt. Our family really appreciates knowing she had such great neighbors.
B

Posted Nov 10, 2020 at 12:25pm
To the friends and family of Betty Mercier,
We wish to send our deepest sympathy to all concerned in the death of Betty during this troubled time when we cannot get together to share thoughts and memories. She was a special friend and colleague who will be missed by many.
Bill and Karen Stucky
Comment Share
Share via:
SC

Thank you Bill and Karen. She was certainly a special woman. Wish we could hear more stories from her friends.
GD 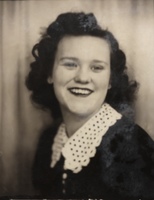 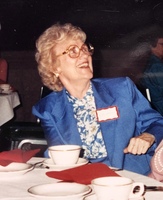