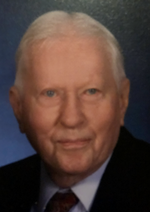 Richard J. Bartlett passed away peacefully on December 2, 2020 in Westfield, IN. He was born on October 24, 1923 in Bloomington, IN where he resided most of his life. He graduated from Bloomington HS and enlisted in WWII becoming an instructor for P38 fighter/bomber planes. After returning from the war, he graduated from Indiana University.

Richard was a loving son to his late parents Goldie and Carl Bartlett.
His brother, Robert Bartlett and
sister, Peggy Kennedy proceed Richard in death. For almost 73 years, Richard was married to his sweet wife, the late Patsy Bartlett.

Richard was the proud grandfather of 11 grandchildren: ten grandsons and one
granddaughter. He has nine amazing great grandchildren. Richard has left a legacy.

Bartlett’s Painting & Decorating Co.’s impact on Bloomington is still evident today and the influence he had on other people and businesses lives on. Woodworking was a great hobby of his and is visible in the many furniture items in his family’s and friend’s homes. Even Richard’s beloved church, First United Methodist Church of Bloomington has his workmanship.

Richard humorously called himself a wanderlust including friends and family in his travels.

A celebration will be planned for 2021.

In lieu of flowers, the family asks for you to donate to a charity of your choice.

A private entombment will be Tuesday, December 8, 2020 at Valhalla Memory Gardens where the Monroe County Veteran’s Honor Guard will perform military rites.

The Funeral Chapel of Powell and Deckard in Bloomington is handling arrangements.