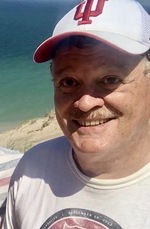 Paul F. Hartin, of Bloomington, IN, passed away unexpectedly on the morning of December 22, 2020, at home. Mr. Hartin was born on November 14, 1950, to John Sykes, Sr., and Rita Mae (Miller) Hartin in Oxford, MS. He was preceded in death by his parents and a brother, John S. Hartin, Jr.
On May 5, 1973, he married Susan J. (Harker) at the First United Presbyterian Church in Bloomington. She survives along with a son, Kevin P. Hartin of Bloomington and a daughter, Kathleen (Katie) S. Hartin with fiancé Konstantin Pakhomov of Reston, VA. Also surviving are his sister, Martha Molpus, of Burlington, VT, niece Anna Molpus (Paul Iobst) and their children, Simon and Ian, of Silver Spring, MD.
Paul worked in the MCCSC as a music teacher from 1972 – 1975 and later as an elementary string teacher for over a decade. Paul also owned and managed Ars Nova music store for many years before turning over its management to his son. For the past five years, he worked in various capacities for IU Event Services and took great pleasure in meeting and helping people. From 2004 to 2020, he participated in Hoosiers Outrun Cancer.
Paul was an active musician, playing for many years in the Bloomington Symphony Orchestra and composing several pieces for the orchestra. He also played in the Bloomington Pops Orchestra, the Bloomington Brass Band, with the IU Marching Hundred Alumni Band and, most recently, the Southern Indiana Wind Ensemble. Additionally, he was one of the original TubaSantas.
No visitation is scheduled. A private service will be observed by the family on Saturday, December 26th, with cremation to follow. The Funeral Chapel of Powell and Deckard has been entrusted with arrangements. In lieu of flowers, contributions may be made in Paul’s name to the Bloomington Symphony Orchestra or to the Jane A. Gouker Endowment for the benefit of the MCCSC Elementary String Program. A Celebration of Life service will be held for Paul in 2021 once it is safe to gather.