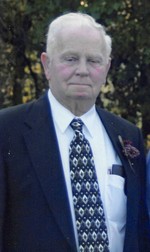 Chester Hacker, 91 of Bloomfield passed away on Sunday, December 27, 2020 at his residence. Chester was born March 9, 1929 in Bloomington and was the son of the late Earl and Violet (Peters) Hacker.
Chester was a farmer and had also worked for Griffith Motor Express, Hoosier Energy and later owned C.E. Hacker and Sons Sawmill and Logging. After retirement Chester was a minister serving with his wife at Dolan Ridge Church in Bloomington, Union Church in Hendricksville and Koleen United Methodist Church in Koleen.
Chester is survived by his sons, Steve (Brenda) Hacker of Bloomington, Randy (Rita) Hacker of Bloomington, and Bryan (Renee) Hacker of Bloomfield; 6 grandchildren, 11 great grandchildren and a sister, Esther Grubb of Gosport.
Chester was preceded in death by his wife of 70 years, Martha Joyce Hacker (2018), his parents, 2 sisters, Ruby Joan Grubb and Lillian Scales and a brother Robert Hacker.
Graveside services will be Monday, January 4, 2021 at 1 pm at Walnut Grove Cemetery in Bloomfield. Pastor Don Campbell will officiate the service.