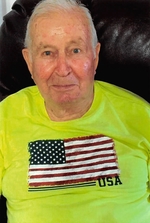 George H. Richardson 86 of Bloomington passed away Monday, December 28, 2020 after an extended stay at Stonecroft Health Campus.
He was born on August, 9, 1934 the son of John Richardson and Ella (Deckard) Richardson.
He was a 1952 graduate of Smithville High School.
George spent most of his career as a skilled brick and stone mason and was a self described Artistic Manipulator of clay products. He had worked on many of Indiana’s Historic Buildings. He retired in 1996 from Indiana University Hall’s of Residence.
He has been a member of St. Paul United Methodist Church of Bloomington for the past 53 years.
George enjoyed bowling and golf and experienced 2 Hole in Ones in recent years.
He is survived by his wife of 68 years Betty (Hendricks) Richardson, daughters Teresa Ball (Husband Paul Miller) of Cicero, In and Delisa Smith (Husband Larry) of Hays, Kansas. Also surviving are granddaughters Amy Rainbolt of Jacksonville, Florida and Larisa Smith of Hays, Kansas as well as many nieces and nephews.
He is survived by one sister Retha Conolty of Solsberry. In addition to his parents he was preceded in death by his brothers, Jim, John and Henry as well as sisters Magdalene Fox and Cora Kinser.
In lieu of flowers the family request all memorial donations be made in his name to St. Paul United Methodist Church, 4201 W. Third Street, Bloomington, In 47404
A Private Graveside Service will be held and officiated by The Rev. Dr. David Mullens of St. Paul United Methodist Church.
At a later date the family will host a Celebration of Life in George’s memory.