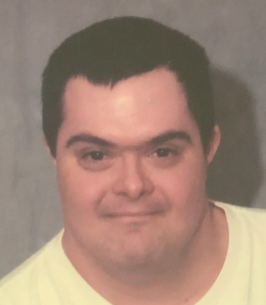 Jody Howard Deckard, 53, of Bloomington was born September 19, 1967 in Indianapolis, IN to Joseph P. Deckard and Betty L. (Kinser) Deckard.
Jody was a special person born with Down Syndrome and in his late 40’s lived with dementia. In 1993, at the age of 25, he moved into a group home owned by Options for Better Living which is now Life Designs, Inc. At the age of 40 he was able to buy his own home still with staff from Life Designs.
Jody loved everyone but also knew those who had difficulty in accepting him. He had several community jobs over the years but lastly worked at Stone Belt until his health prevented him from working.
Jody loved his family and family reunions, music, and sports (I.U. and the Colts). He was mischievous and loved to tease, especially his staff that were girls.
He is survived by his mother, Betty (Kinser) Deckard, brother, Michael (Laura) J. Deckard, two nieces, Mikayla L. Deckard and Madison L. Deckard, one nephew, Mitchell T. Deckard.
He was predeceased in death by his father, Joseph P. Deckard in 2017, his paternal grandparents, Howard and Gayle Deckard. His maternal grandparents, Riley and Maggie Kinser and several aunts and uncles.
A special thank you to his staff at Life Designs over the years and especially his current staff: Angela Jeffrey, Kelli Delaney, JoJo McKee, Jordan Maclain and Erin Thurston..
A graveside service will be 2:00pm January 8, 2021 at Valhalla Memory Gardens with Pastor Allen Ketchersid officiating. The Funeral Chapel of Powell and Deckard is handling arrangements.
Donations in Jody’s memory can be made to Life Designs, 200 E. Winslow Rd., Bloomington, IN 47401 or Stone Belt, 2815 E. 10th St., Bloomington, IN 47408.