To share your memory on the wall of Ronald Arthur \"Ron\" Adamson, sign in using one of the following options:

Print
Ronald Arthur Adamson was born July 30th, 1944 in Oceanside California. He passed at the IU Health Hospital on January 15th, 2021. Ron fought Covid-19 and its post damage for 24 days until it was out of his control. Survived by his wife, Jo Adamson o... Read More
Ronald Arthur Adamson was born July 30th, 1944 in Oceanside California. He passed at the IU Health Hospital on January 15th, 2021. Ron fought Covid-19 and its post damage for 24 days until it was out of his control. Survived by his wife, Jo Adamson of 56 years, his first born Kelly Scott Adamson and his wife, Ronelene and their 3 children, Felicia, Summer, and Samuel , second born Kristie Lynn Adamson her 3 children, MacKenzie, Miriah, and Isley, raising granddaughter MacKenzie from a infant.
Ronald was raised in Washington, Indiana. He attended VU for business. Ron moved to Bloomington in 1967 with his wife as he accepted a job with Gerber as a Account Manager; in which he stayed with for 33 years. After leaving he began working with IU Credit Union in Investment Services that he ended up retiring from. You would have thought he would have done enough and enjoyed his time at home, he quickly picked up a part time job at a local law firm doing data processing, then after a year he found himself getting a chauffeur license so he could drive for Go Express for some socialization.
Despite work Ron loved people in general and was a very active person. One accomplishment in which he loved was organizing The Country Jamboree that he held at the Conder Farm it was a place for musicians, novice singers to gather have a pitch in mingle and share their love of music. He believed everyone could value from learning music or a instrument. Maybe he got that from the past Country Dreamers in which they went weekly to nursing homes or small halls and even many years at the Monroe County fair to share entertainment. Good clean fun with purpose it was. Ron spent over a decade playing basketball at the YMCA and in the recent the Sportplex was the go to spot. Pickelball became a new and highly enjoyable hobby sport for him as well. His number one passion amongst all was his love of bike riding dozens of remaining mugs for the many Hilly Hundreds bike rides still fill the cabinets and tshirts fill his drawers. He loved teaching his grandchildren and friends the joy of a good bike ride and not short ones either but 20 mile plus rides for coffee breakfast and sight-seeing and he would have made light humor if he saw you weren’t in as good as shape as him.
His personality has been described as infectious, he loved to laugh. Fishing he was skilled in fishing, it started at a young age and was developed with his late father in law. He kept that skill close with his children, grandchildren, and close friends. Many great stories he had of our lakes. Blue gill were his catch of choice and nothing was better than a fish sandwich the day after fishing.
One of Ron’s best attributes was his gift to be heard. Followed by his gain of respect from his family and friends. Ron was an absolute natural leader. He was patient generous always will to help with suggestions and it didn’t matter who you were he wanted the best for you. He has been honored to marry three beautiful couples by their request. He has been blessed to complete several baptisms. He was able to preach on an occasional basis. Eulogies he was happy to give for families as his last respect for those friends he cared for. Ron was not a procrastinator, he was a man of his word, he was beyond dependable.
He was devoted completely to his family; a loyal husband a protector, provider filled with intelligence and strength.
Above all in what made who he is was his commitment and love for God. When Ron was burdened he’d close his eyes pray and give his burdens away. We see Ron as a man who lived as pure as human man can be strong morals, values and goals that many lack today. All of his children he ensured were raised in church. Ron was a member at Bridge Church of Christ in Unionville for 30+ year ; it was unseen for him unless ill to miss a day for his own plans. He was a Decan, later promoted to Elder.
As said Ron was as exceptional man who went too soon for us all; he was definitely not ready himself. This plague has taken from many underservant families, our family knows however he has had his place secure in heaven for a very long time and he lived prospering. For that we shall see him again but until that time our physical world has a large void in it that cannot be filled and our hearts will be tender.
Graveside services will be at 2:00 PM on Thursday, January 21, 2021 at Bridge Church of Christ Cemetery, 6996 N. Tunnel Road Unionville, Indiana.
In lieu of flowers, the family requests that donations be made to Bridge Church of Christ.
Read Less

We encourage you to share your most beloved memories of Ronald Arthur "Ron" here, so that the family and other loved ones can always see it. You can upload cherished photographs, or share your favorite stories, and can even comment on those shared by others.

All Your Friends at HFI sent flowers to the family of Ronald Arthur "Ron" Adamson.
Show you care by sending flowers

Posted Jan 22, 2021 at 06:09pm
Ron was part of our Wednesday evening basketball games, and was a joy to play with and be around. I was just informed of his passing by one of the guys. We will miss him and his big personality. Condolences to his family. - Greg
Comment Share
Share via:
HS

Flowers were purchased for the family of Ronald Arthur "Ron" Adamson. Send Flowers

Posted Jan 19, 2021 at 07:03pm
We are so sorry to hear of this loss and our thoughts and prayers go out to his family. The "Country Dreamers" became a fixture at most of our Monthly Monday night dinners at the Owen County Senior Center. The band has brought so much joy to all of us (our members) while sharing their love of music unconditionally. Ron's kindness, smile and laughter will be greatly missed.
God Bless
Tim & Billie Freeman
(Senior Friends of Owen County)
Comment Share
Share via:
MM

Posted Jan 19, 2021 at 06:46pm
To Jo and family,
We wish to extend our sincerest condolences. Ron’s passing is such a sadness for the community and our little neighborhood. Ron was such a friendly, outgoing neighbor to us, and we shall miss him! Please let us know if there is anything we can do. We hold the family in our prayers and will be thinking about you as you navigate this incredible loss.
Martha & David Moore

Posted Jan 18, 2021 at 03:53pm
Ron will be greatly missed by many of the Pickleball-Bloomington players...he was always great fun to play with or against. He always had such a great attitude, win or lose, and instilled that in others. Rest in peace Partner. Posted by Paula Stillions and Marsha Hankins and on behalf o other TLRC players who also loved Ron. 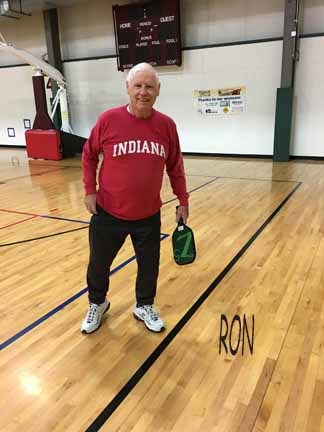 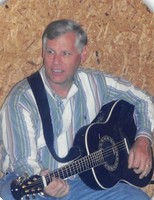 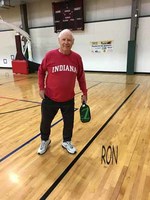