To share your memory on the wall of Janet Arthur, sign in using one of the following options:

Print
Due to Covid-19 services will be private!

We encourage you to share your most beloved memories of Janet here, so that the family and other loved ones can always see it. You can upload cherished photographs, or share your favorite stories, and can even comment on those shared by others.

Ellen, Dave Tiberend / Lisa and Katie Slawson, Jack & Jackie Thompson, and other have sent flowers to the family of Janet Arthur.
Show you care by sending flowers

Posted Feb 02, 2021 at 06:58pm
Planting 3 trees for her three children. They shall grow strong and great just like their Mom. Love you all.

3 trees were planted in the memory of Janet Arthur

Posted Feb 19, 2021 at 12:48pm
Janet was a beloved member of IU Event Services. She was so nice to everyone and was a fan favorite in her sections. I was so sad to hear about her passing. She will be greatly missed at IU sporting events, by both her fellow staff members and fans in attendance!
Comment Share
Share via:
JW

Posted Feb 06, 2021 at 09:56am
To Janet's family, I am shocked at her passing. I just spoke with her a few weeks ago. Knew Janet for years of working at the hospital, my sons racing and of course she has done our taxes for years. We had recently talked about the Emmaus Walk. She was so sweet and caring and always had a smile. Praying for God's peace and comfort for each of you. I know she loved each of you dearly. She will be missed.
Comment Share
Share via:
MM

Posted Feb 05, 2021 at 02:30pm
Praying for many wonderful memories to flood your minds to help you smile through the pain of grief and loss. May God's peace that surpasses all understanding be felt in such a real way.

Posted Feb 04, 2021 at 03:48pm
I worked with your mom for many years at the hospital. She was very dedicated, showed compassion, helpful, and great to many. I hate to hear she is gone. I do know that she loved each and everyone of you. Prayers to all,
Comment Share
Share via: 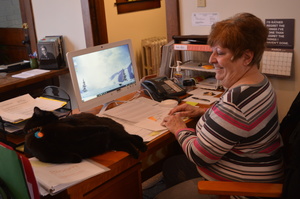