To share your memory on the wall of Richard Lee \"Newt\" Chitwood, sign in using one of the following options:

He was an avid IU basketball fan and a personal friend of Bob Knight. He had many memories with him and players over the years. Newt was also a pilot in his early years and later built his own ultralight airplane in his basement. Newt loved spending time with his family especially his grandchildren and great grandchildren.

Newt was preceded in death by his parents; one sister, Bertha Mae Young; and four brothers, Charlie, Paul, Morris and Raymond Chitwood which was killed in World War II.

Visitation for Newt will be Wednesday, February 10, 2021 from 2 – 8pm at the funeral Chapel of Powell and Deckard 3000 E. 3rd St., Bloomington. Do you to COVID-19 restrictions we can only have 25 people in the funeral home at a time and a mask is required. We ask for your patience if there is a line.

Funeral services will be 11 AM Thursday, February 11, 2021 at the Unionville Church of Christ, 8056 Indiana 45, Unionville, IN. There will be visitation from 10 to 11AM With funeral service immediately following.

In lieu of the flowers donations may be given in Newt’s memory to the..Berean Children’s Home, INC.
1180 Berra TR. S.E.
Bogue Chitto, MS 39629
Read Less

We encourage you to share your most beloved memories of Richard Lee here, so that the family and other loved ones can always see it. You can upload cherished photographs, or share your favorite stories, and can even comment on those shared by others.

Andy, Jayne Asher & Family, Love, Branden, Kirsten and Hudson Boyd, and other have sent flowers to the family of Richard Lee "Newt" Chitwood.
Show you care by sending flowers

Posted Feb 20, 2021 at 04:07pm
Rodger and I send our love and prayers to you during this sad time.....May you be held close in God's arms during this time of grief. Love to you all,
Sheryl and Rodger Henry
Comment Share
Share via:

Posted Feb 12, 2021 at 08:16am
I grew up in Unionville, my father James (Puge) Sluss new Newt very well. As I grew up I learned to trust Newt and his business. After my divorce he always made sure my car was operating well so I would not end up broken down beside the road with my daughter. This was a difficult job since my car was really a Junker. After my father passed he did the same for my mother. Once I moved out of the city and then out of the state we would drop by his business and say hello. He would always smile as he greeted us (my daughter and I). He was one of the good ones and is gone too soon.

Posted Feb 11, 2021 at 12:57pm
When I was a young woman, Newt was the only mechanic I knew I could trust. He may have seemed a little gruff sometimes, but was always polite and helpful to me. My old cars needed a lot of help to stay on the road, and I never had much money. Newt understood that. He would tell me straight out when a repair might not be worth doing on a geriatric clunker. My interactions with him were often at times when I was scared and confused. I didn't really know him, but I knew he was a good man that I could trust.
Comment Share
Share via:
MF

Posted Feb 10, 2021 at 10:52pm
Nance & family I am so sorry to hear about Newt. He was so sweet & caring. He was so good to my Mom. Whenever she needed help with her car he was always available to help her. Dad & Mom always took their car to Newt. I remember his spot @ the Basket ball games. We always looked to make sure he was there. Every time we pass his station on 17th St we always talk about how sweet he was to both Mom & Dad & he was basically the only person they would allow to work on their car. He will be remembered for his thoughtfulness & just being a wonderful man. We will be praying for you all for strength & comfort in the coming weeks & days.

Flowers were purchased and a memorial tree planted for the family of Richard Lee "Newt" Chitwood. Send Flowers 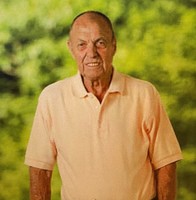