To share your memory on the wall of Samuel Mallor, sign in using one of the following options:

When the war ended, Sam returned to Newark. At a dance he attended at a Catskills resort, he met Dorothy Davis, the most beautiful girl he had ever seen. According to Sam, this was the luckiest day of his life. He and Dot soon married. They were quite a team—they created a happy home for their three children, moving from Newark to Westfield, New Jersey. It was here that Sam built a successful career as an industrial real estate broker and appraiser.

After retirement, Sam and Dot spent the warm weather months in Bloomington and cold weather months in Florida, spending time with grandchildren. As they got older, they spent more of the year in Bloomington and ultimately became full-time residents. When Dot died in 2013, Sam moved to Meadowood Retirement Community, where he made many new friends. He was a member of Congregation Beth Shalom.

Sam had a wonderful sense of humor but will be remembered most for being an empathetic and attentive listener. He loved learning everyone’s story, rarely telling his own unless asked. His own was a life of devotion to his family with unbelievable love for his wife and children and delight in being a grandfather and great-grandfather. He loved music, especially opera, and reading challenging non-fiction. His compassion for and generosity to other people was abundant. He was always curious about learning new things and persistent in trying to find a solution to any problem.

Sam was preceded in death by his wife, parents, a brother, and almost everyone he grew up with. He is survived by his three children, Andrew Mallor (Jane), Jane McBride (Patrick), and Amy Mallor, his younger brother Julius, five grandchildren, Jessie Mallor, Kate Mallor (Jeremy Bernstein), Emily Mallor, Brandon McBride and Michael McBride, and two great grandsons, Lior and Lev Bernstein.

A memorial service will be held when travel and gathering are safe. The family requests that in lieu of flowers, donations be made to IU Health Hospice or Hoosier Hills Food Bank.
Read Less

We encourage you to share your most beloved memories of Samuel here, so that the family and other loved ones can always see it. You can upload cherished photographs, or share your favorite stories, and can even comment on those shared by others.

Posted Mar 14, 2021 at 10:02pm
Sorry you lost your dad. Sounds like he was a bad ass American. We know you were a super proud son. Our thoughts and prayers are with you.

Posted Mar 14, 2021 at 08:45am
I'm just one of the many residents of Meadowood who will miss Sam Mallor and his witty and often amusing conversations. In the few years he lived here, he made many friends. They, like his beloved family will grieve his passing, but in our hearts we know he is happy. In his past years at Meadowood, he was my poker buddy every Thursday, my bridge partner for four years and a dinner partner many times. We each had memories of younger loving years spent with our respective spouses which we often discussed. Sam always listened, and he always shared. He was proud of his family, proud of his personal success in the competitive business world, proud of his Army service in World War II and even of his longevity...101 years!. Those who were fortunate to know him will lead a lonelier, sadder life without his sense of humor, his wit and his wisdom. God speed. dear friend Sam.

Posted Mar 12, 2021 at 10:48am
So grateful to have been able to share dinner conversations with Sam, listen to his remarkable stories, laugh at his wit and humor, all along recognizing the genuine kindness that emanated from his gentle soul...you will be missed...may you be at eternal peace...Bruce and Cathy
Comment Share
Share via: 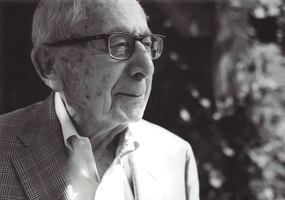