To share your memory on the wall of Betty Rieger, sign in using one of the following options:

We encourage you to share your most beloved memories of Betty here, so that the family and other loved ones can always see it. You can upload cherished photographs, or share your favorite stories, and can even comment on those shared by others.

Michael and Priscilla Buck sent flowers to the family of Betty Rieger.
Show you care by sending flowers

Rose Tribute was purchased and planted a memorial tree for the family of Betty Rieger. Send Flowers

Posted Jun 03, 2021 at 09:34am
Mark, Corry, and Sherry...Dan and I loved and adored your mother!!! She was the definition of "SUNSHINE" every time I saw her in town, at the grocery, or at a Theta meeting. WOW...Life didn't just happen to Betty, she created a wonderful life for herself and her family! Love to all.
Comment Share
Share via:
MT

Posted May 30, 2021 at 08:13am
She was a great lady who always went out of her way to greet you with her smile, and was one of the nicest people you could ever know. She will be missed.
Comment Share
Share via: 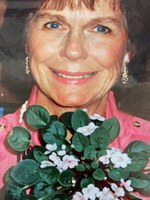