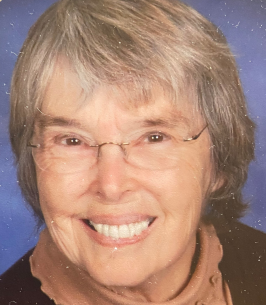 Eleanor (Ellie) MacDonald died Friday morning, November 5, 2021 at IU Health University Hospital in Indianapolis, Indiana. She was 84 years old.
Born February 11, 1937 in Hanamkonda, India, to John Spencer Carman and Naomi Hull Carman, medical missionaries, Ellie lived in many different places, including Vellore, India; Rochester, New York; La Grange, Illinois; and Bloomington, Indiana. She graduated from the University of Rochester in 1957 and was accepted into the University of Rochester School of Medicine.
She married Malcolm Harris Macfarlane on May 30, 1957 at Lake Avenue Baptist Church in Rochester, New York. After raising a family, Ellie taught eighth grade at Cossitt Elementary School in La Grange, Illinois, and fifth grade at Oak Avenue Elementary School in Hinsdale, Illinois. She earned a master’s degree in teaching from the University of Chicago in 1975. She later taught parents and educators ways to teach reading to children at Indiana University in Bloomington, Indiana. She had a unique talent for teaching and was able to relate to students from pre-school age to post-doctoral.
Ellie was a longtime and devoted member of the Christ Community Church (CCC) in Bloomington. She sang in the church choir and was a member of a group that knitted hats and donated them to infants. For years Ellie was involved with the CCC Missions Committee. In February of 2020, she participated in a mission trip to Ghana where she worked with teachers to enhance their teaching techniques. Throughout her time in Bloomington, she welcomed numerous international students into her home for meals and fellowship.
After her husband, Malcolm, died in 2008, Ellie married William MacDonald in 2011. She was preceded in death by William in 2017, her sister Eslie Carman, and her brother Bruce Carman.
She is survived by three siblings, John Carman, Robert Carman, and Margaret Tegenfeldt; four children, Douglas Macfarlane of Colorado, Kenneth Macfarlane of Maryland, Sheila Rice of Virginia, and Christine Macfarlane of California; her son-in-law David Rice, daughters-in-law Betty Macfarlane and Karen Macfarlane; her step-children Valerie Giles of Colorado and Victor MacDonald of Massachusetts; six grandchildren, Jessie, Caitlin, Ian, Sierra, Michael and James; ten step-grandchildren, Carol, Bonnie, Vincent, Peter, Nathan, Daniel, Matthew, Hanna, Brianna and Rebecca; three great-grandchildren; and ten step-great-grandchildren; as well as numerous nieces, nephews, friends and adopted family, all of whom she adored. A beloved mother, grandmother, sister, teacher and friend, she will be missed by all.
A service of celebration of Ellie’s life will be held at Christ Community Church in Bloomington on Saturday, December 11 at 2:00 pm with a reception following. Memorial contributions may be sent to Christ Community Church, Missions, 503 South High Street, Bloomington, IN 47401.
Arrangements are entrusted to The Funeral Chapel of Powell and Deckard.