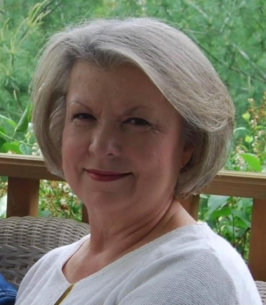 Doretta Suzanne Durnil, age 73, of Ellettsville, Indiana passed away peacefully on November 13th, 2021, surrounded by her family. She was born on May 1st, 1948, in Cincinnati, Ohio to David and Peggy (Adkins) Woodward.

Doretta was a wonderful wife, mother, grandmother, daughter, sister, aunt, cousin, and friend. She loved music, particularly singing (and laughing) with her family and was an accomplished, awarded artist who loved to paint with her grandchildren. Everyone who knew Doretta, knew she deeply loved the Lord, the church, her family, and her friends.

Doretta served in many roles during her lifetime including bank teller, courtroom clerk, newspaper writer and classroom assistant. She was also a member of the Walk-a-Lot of Indiana Extension Homemakers Club, her Ladies Bible Study Group and she served in Tri-Kappa, both in Knightstown and in Ellettsville. She was a member of the White River Little Flock Primitive Baptist Church where she served as their secretary. She also attended IUPUI and was Valedictorian of her class.

Doretta is survived by her loving husband of 54 years, Jimmie D. Durnil; her sons Todd and his wife Dawn, Curt, and his wife Lori, all of Ellettsville; her mother, Peggy J. Woodward, of Bloomington, Indiana; sister, Beth Dawley & husband, Gordon, of Bloomington, her brother, Andrew Woodward, and her brother-in-law Dan Swafford, both of Whitehall. The Durnil Grandchildren include Ryan and his wife Kellie, their son Sawyer and expected child due in 2022, Harrison and his wife Abigail and their son Daniel, all of Freedom, Indiana; Jack, of Orlando Florida, Sam, of Bloomington, and Joe, Sara, Jesse, John, and Aria, all of Ellettsville. Doretta was also blessed with a multitude of nieces, nephews, and cousins.

Visitation will be held at Sherwood Oaks Christian Church on Monday, November 22nd from 2-8p, and on Tuesday November 23rd from 12-2p with services to follow. Graveside service will be held at Gross Cemetery, in Whitehall, Indiana, following the service. Services to be conducted by her son, Elder Todd Durnil.

Memorial contributions may be sent to the Ellettsville Reserve Police Department at 1406 W. Guy McCown Drive, Ellettsville, IN 47429 or given at the church.