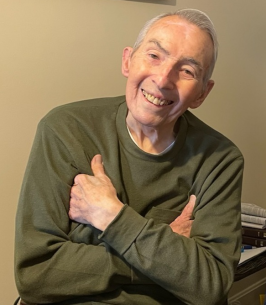 Glenn D. Toney, 90, of Bloomington passed away on Wednesday, December 29, 2021 at Hospice House in Bloomington, IN.

Glenn was born March 25, 1931 in Marion, NC and was the baby son of 5 boys to Ethel and Alonzo Toney. His father having passed when Glenn was only 3 years old.
Glenn married Donna Flint - Toney, February 8th, 1975 at Fort Benjamin Harrison. They vowed to love, protect, honor and obey their vows ‘til death us do part’ and their marriage was an example of how our lives should be lived and conducted, not only at home, but anywhere you go.
Glenn was a 26 year Air Force veteran, retiring in 1975 as Senior Master Sergeant. He and Donna both received their degrees and went on to teach at Edgewood High School, until retiring in 1995.
Glenn loved life, his family (and told us every day!), his Bible, Andy Griffith on repeat and most importantly he loved God beyond measure. Both he and Donna witnessed to so many people in so many different countries over the course of their marriage, even right up until his passing.
Glenn is survived by his wife, Donna Toney of Bloomington, his two daughters, Glenda (Dan) Herrin of San Antonio, TX, Angie (Ted) Denny of Bloomington, his two sons, Mark (Kristie) Demmary of Bloomington, Brett (Jennifer) Demmary of Indianapolis, four Grandsons, Caleb, Joshua, Zach and Matt, one Granddaughter, Grace, 6 Granddogs, Lacey, Emmy, Belle, Tinker, Piper and Riley and several much loved nieces and nephews.

Glenn’s family will receive family and friends at Sherwood Oaks Christian Church East on Tuesday, January 4th, 2022 from 4p-8p. A service will be conducted January 5th, 2022 at 11am with Tom Ellsworth and Mike Toney. Family will receive friends one hour prior to the service on the 5th.

We were taught to live by the Golden Rule and To Smile and Be Friendly. May none of us fail in our effort to go and do likewise. Well done, Good and Faithful Servant. See you at the Eastern gate!