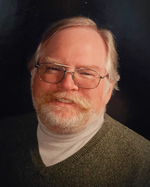 David Paul Walter, Architect, 71, of Bloomington, died Sunday, April 10, 2022 at his residence. He was born August 8, 1950 in Auburn, Indiana and was an Eagle Scout. David graduated in 1968 from DeKalb High School and married classmate and love of his life, Carol Janet Williams, in 1986 in Beck Chapel on the Indiana University campus.

He studied architecture at Miami University in Oxford, Ohio, which included a year at the Architecture Association in London, England. He joined Kappa Sigma fraternity and graduated with a Bachelor of Architecture degree in 1973. He volunteered for VISTA in 1974 and worked for East Side Housing, a non-profit, low-income housing developer in Decatur, Illinois. He then designed nursing homes for Americana Healthcare in Monticello, Illinois. In 1979 he became a licensed architect in the states of Illinois and Indiana.
Several fortunate events resulted in David being hired by Indiana University Facilities in 1980. He was an Associate University Architect and was still actively working. During his career David oversaw restoration and repairs of IU’s historic buildings including McCalla School, Kirkwood Observatory, Wylie House, Legg House, the Rose Well House, and Kirkwood Hall.

As a member of Bloomington Restorations, Inc. he worked on the BRI Affordable Housing Committee. Appointed by the Bloomington City Council to the Redevelopment Commission for over 35 years, David assisted in the development of B-Line Trail, Switchyard Park, Trades District and Block Grant funding for community projects.

He was preceded in death by his father, Paul E. Walter, his mother, E. Pauline Blickenstaff, and his stepfather, C.W. “Red” Blickenstaff.

He is survived by his wife, Carol Walter, daughters Diane Payne and Deborah (Ben) Fogt, brother Stephen (Ruth) Walter, and their families.

Cremation Rites have been accorded.

A Memorial Service to Honor David’s life will be held at 2 pm Saturday, April 23, 2022, at The Funeral Chapel of Powell and Deckard, 3000 E. Third St. Bloomington, with visitation from 10 am until service time.

Memorial Services will also be held in David’s hometown of Auburn, Indiana on May 7, 2022 at Pinnington Funeral Home, 502 N. Main St. Auburn, IN. at 2 pm with visitation from Noon until the service time at 2. Burial of David’s Ashes will follow at Cedar Creek Cemetery

In lieu of flowers, gifts may be made to Bloomington Restorations.