Obituary for Lovena A. Waldrip 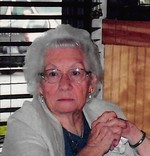 Lovena A. Waldrip, 100, of Bloomington passed away on Saturday, April 23, 2022 at Garden Villa Nursing Home.

Lovena was born in Lafayette, IN on March 20, 1922 to Luther and Nora Wray. She attended Handy Grade School and Smithville High School. She was a member of Mt. Calvary Baptist Church in Bloomington. She started her working career at Schmalz Department Store in 1957 and ended her working career retiring from Eberle Hardware in the 1980’s. She worked for Buddy Bill’s Bait Barn making sandwiches for several years. She was known as Grandma by most of her customers.

Lovena married Charles Waldrip on December 3, 1938 and they were married for 57 years. Charles passed away on September 6, 1996 and she is also preceded in death by her son Dwight K. Waldrip in October, 1987, and brother Leabert Wray.

Services will be on Thursday at 11 am at The Funeral Chapel with Revs. Richard Borden and Jim Barker officiating. Burial will follow at Clear Creek Cemetery where she will be laid to rest next to Charles.

Lovena’s family would like to give many thanks to all the staff in the Emergency Room at Bloomington Hospital and the staff at Garden Villa Nursing Home for their kind care and keeping the family informed.

In lieu of flowers donations may be given to Mt. Calvary Baptist Church.