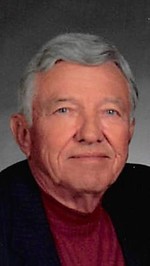 Donald Wayne Abram, 87, was called from the loving arms of his wife, Janis, to his heavenly home on May 1, 2022. He departed from his Bloomington home surrounded by family.

Born March 15, 1935 in Greene County, Indiana, Don is the son of the late Wayne and Hazel (Keller) Abram.

A graduate of Solsberry High School, Don continued his education at Indiana University. He was on the IU basketball team as a freshman, earned Bachelor of Science in Physical Education and Mathematics in 1960, and Master of Science Degree in Education in 1964. A lifelong learner, Don was awarded two National Science Foundation grants for summer programs in advanced mathematics studies at University of Idaho and University of Wyoming.

Don completed his 36 years of service in education retiring as personnel director for the Monroe County Community School Corporation. He began his career in 1956 coaching basketball and teaching math at Solsberry High School then at Pittsboro High School in Hendricks County. Don returned to Bloomington to work for MCCSC in 1965. He taught math at Dyer Junior High then moved to Bloomington High School South where he was counselor, dean of students, and assistant principal.

A member of Sherwood Oaks Christian Church, Don’s faith was the foundation of his life. He enjoyed the outdoors, particularly hiking southern Indiana woods, fishing, and golfing. He closely followed IU basketball and Cubs baseball. He enjoyed family gatherings, telling stories, and spending time with his family. Don loved traveling the United States with his wife, Janis.

Don was preceded in death by his parents, two sisters and brothers-in-law, Faye and Charles Hudson and Elizabeth and Truman Hudson; and one niece, Peggy Burks.

Services for Don will be on Saturday at 1 pm at Solsberry Christian Church with Tom Ellsworth and Tom McNerney officiating. Burial will follow at Solsberry Cemetery.

In lieu of flowers donations may be made to Tom Ellsworth Ministries or Solsberry Christian Church.