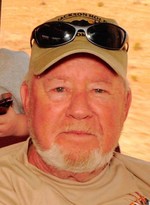 Charles Eugene Saunders, Sr., 81, Bloomington, Indiana passed away Tuesday, May 3, 2022 at his residence. He was born December 25, 1940 in Greene County, Indiana, the son of Charles Henry and Clara Lucille (Porter) Saunders.

Charles was retired from the US Air Force and was known as a boat mechanic for 50 years. He was an avid lover of fishing and hunting.

He was preceded in death by his parents and two Brothers, Robert and Donald Saunders.