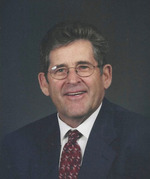 James Edward Gilliland, 87, of Bloomington passed away on Tuesday, May 3, 2022 at Brookdale Senior Living surrounded by his family.

Jim was born July 13, 1934 in Monroe County and was the son of the late Edward Roger and Lucille (Young) Gilliland. He was a school bus driver for over 20 years and later retired from IMI where he drove a concrete truck.

Jim was a 77 year member of New Prospect Baptist Church where he served as Deacon and Trustee. He had an impact on many children through the years serving as a 4-H Leader and driving his school bus. He enjoyed traveling but his greatest love was spending time with his grandchildren.

Visitation for Jim will be on Monday, May 9, 2022 from 10 am until 12 pm at The Funeral Chapel of Powell and Deckard.

In lieu of flowers, donations in Jim’s memory may be made to New Prospect Baptist Church.