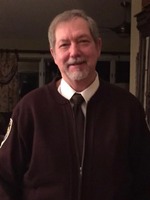 Steven Michael Chambers, age 72, formerly of Bloomington, IN, passed away peacefully on May 1, 2022 in Palm Harbor, Florida. He was born in Bloomington, Indiana, on November 17, 1949, the son of Clarence Robert and Marjorie (Flynn) Chambers.

After graduating from Bloomington High School, Steve joined the United States Army and was assigned to the 173rd Airborne Brigade in Vietnam. In addition to two unit citations, he was awarded the Army Commendation Medal and the Bronze Star for his service. After returning to Bloomington, he became a deputy with the Monroe County Sheriff’s Department. He served 31 years in various positions including Chief Deputy, Operations Captain, Detective Sergeant, and Patrol Sergeant. During his tenure with the department, he was named Policeman of the Year by the Fraternal Order of Police and the Exchange Clubs of Bloomington, IN. He was also awarded bravery awards from the Fraternal Order of Police and the Monroe County Sheriff’s Department. After retiring from the sheriff’s department, Steve continued to work as the supervising bailiff for the Monroe County Unified Courts until declining health forced him to retire.

Steve was preceded in death by his parents and his stepson Benjamin Alexander.

Memorial contributions may be made to the Monroe County Humane Society or the American Cancer Society.

Steve's service may be viewed on The Funeral Chapel's YouTube Channel at the following link: