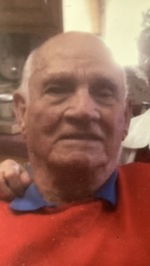 John Allen Buffaloe of Bloomington, Indiana, age 98, passed away on May 6, 2022. He was born September 10, 1923 in Bloomington to Marcus Harry and Goldie (Chambers) Buffaloe. On April 30, 1949, John married the love of his life, Eva Mae (Baugh) Buffaloe, and they were married 73 years.
John and Eva had two children and two God-children, son, John Marcus Buffaloe, daughter, Debra Jo Buffaloe, God-sons, Justin Marcus Dunbar (Laura) and Justin David Dunbar (Anna). John had three sisters, Pauline Gentry-Laudermilk, Jenny Sullivan-Wier, and Marilyn Sue Mosier-Philips, two sisters-in-law, Ellen Reister and Mariann Luna, aunt who helped raise John, Goldene (Chambers) Fender, and several cousins, nieces and nephews.
Before John married Eva, he traveled to California where he joined the Navy during WWII on October 20, 1942, and served on several ships in the North and South Pacific until his discharge on January 10, 1946. After his discharge, John returned to Bloomington and attended Indiana University to further his education. At this time, he met Eva and got married. After school, he became a local agent for State Farm Insurance, where he retired after 32 years.
John had many hobbies, but his love was motorcycles. He rode and raced them. John and Eva joined a small local motorcycle club called the Flying Hoosiers, where they met many friends and went on several riding adventures together. John was also a member of the Stoney Lonesome Motorcycle Club, where he rode many races. There is a race named after John that is still going today, called the Buffaloe 500 that has been held for 34 years each fall. John was a lifelong member of the AMA, American Legion Post 18, and Veterans of Foreign Wars Post 604. John was involved in wrestling, and loved it, having been something he did when he was younger. John enjoyed writing stories of his adventures and reading several books. He loved to learn, and spending time with his family and friends was a big part of his life. John loved to talk to his friends at McDonald’s in the mornings for coffee and working on cross word puzzles with his old buddy, Biagio Presti. John had many friends in the 98 years, and many adventures.
Friends and family may call for visitation on May 12, 2022 from 1:00 PM until 2:00 PM at The Funeral Chapel of Powell and Deckard, 3000 E. Third Street Bloomington, Indiana. Graveside services will follow at Clear Creek Cemetery in Bloomington, with Military Honors to be performed.
Memorial contributions may be made to the Boys and Girls Club of Bloomington, or IU Wrestling Foundation.