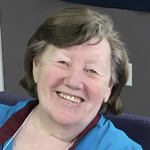 A truly generous and compassionate soul passed from this earthly life on May 10, 2022.
Sharon O’Bryan was born in Scottsburg, Indiana on November 9, 1938 to Dorothy Tomasco O’Bryan and Philip Middleton O’Bryan. She spent much of her childhood with her grandmother and step-grandfather, Mary and Joseph Owsley in Pekin, Indiana.
Sharon was valedictorian of her graduating class in 1956; however, she was unaware that honor also came with a scholarship. She went on to marry and have two daughters, Elizabeth “Liz” Kim Wyman Records (Reed) and Kathy Jane Wyman Deckard (Larry) before discovering the scholarship opportunity and beginning an undergraduate degree. After acquiring this, she went on to complete a master’s degree and administrator’s license then eventually accomplished her doctorate. She is also survived by two grandchildren, Adam Deckard and Haley Sharon Rector (Joshua), as well as two great-grandchildren, Kennedy Deckard and Aden Deckard.
Evermore the encourager throughout her life, Sharon taught English at Bloomington High School South. After receiving her doctorate, she taught Curriculum and Instruction courses at Southern Illinois University in Carbondale. She was quite active in professional development and publishing contributions to her profession. In her next position at Southwest Texas University, she was promoted through the ranks from assistant professor to associate professor and finally full professor. Again this was earned with continuing active participation in professional associations such as Association of Teacher Educators and mentoring undergraduates in Kappa Delta Pi, an educational fraternity. In addition to actively teaching, Dr. O’Bryan contributed in the form of a multitude of publications. Over her rich and varied career, she received numerous awards including “Top 70 Teacher Educators in the Nation” by the Association of Teacher Educators as well as being a Fulbright Scholar to name but a few. A memorial service honoring Sharon’s life and legacy will be held at a later date.