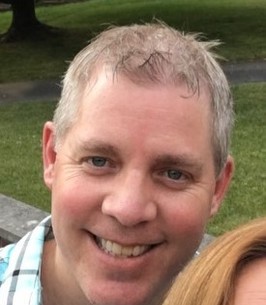 Ryan Joseph Hill, 49, passed away quietly at IU Health on June 15, 2022, after an auto accident. He was born in Bloomington on August 20, 1972, to Gary and Gale Hill. Ryan attended Bloomington South High School and participated in football and track. He earned an 11th and 2nd place in discus in the state meet. He graduated from Ball State University, was a member of the track team, and still holds the school record in discus.
Ryan is survived by his parents, his sister, Jane (Chad) Birckelbaw of Prosper, TX, and two nieces, Halle and Megan Birckelbaw also of Prosper. He is also survived by his aunt and uncle, Lisa and Randy Black of Rensselaer, and cousins, Nicholas and Eleanor Black. He is also survived by his companion, Sarah Hueston.
Ryan is preceded in death by his grandparents, C. Russell and Maxine Hill and Harold and Jean Boehme.
Visitation will be from 10:00 AM until 12:00 PM on Saturday, June 18, 2022 at The Funeral Chapel of Powell and Deckard, 3000 E. Third Street Bloomington, Indiana.
Graveside services will be at 12:30 PM on Saturday at Valhalla Memory Gardens, 310 N. Johnson Ave. Bloomington, Indiana.
Memorial contributions in Ryan’s honor should be made to the charity of your choice.