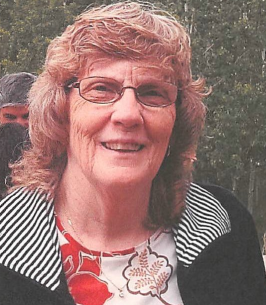 Loretta Jean (Hansen) Saunders, 78 years old
Was born September 4, 1943, in Brisbane, Australia to Thelma (Young) and Eugene B Hansen. She died Tuesday July 5th at her home in Bloomington, IN surrounded by her family.
She lived in many unusual places growing up, as her father was in the Air Force, including Japan and Hawaii. She met Charles Saunders (originally from Bloomington, IN) while attending Radford high school in Honolulu, Hawaii. He was stationed at Pearl Harbor in the Air Force. They fell in love and married November 4, 1961, in Jacksonville, Arkansas. They were married for 60 years until Chuck passed away in May of this year.
They had 6 children: Michelle E. (Danny) Knight of Williams, IN, Charles E. (Regina) Saunders Jr. of Bloomington, IN, Carol D. (John) Carroll of Westfield, IN, Michael R. (Cindy) Saunders of Bloomington, IN, John M. (Lisa) Saunders of Bloomfield, IN and Jennifer L. Howard of Bloomington, IN.
Loretta was the manager of the Jewelry department of Service Merchandise in Bloomington, IN for over 20 years until it closed in 1999. She then worked for Indiana University at the Career Development Center until she retired in 2012.
She was a member of Little Union Baptist Church in Unionville, IN for almost 40 years, where she was very involved with the American Baptist Women and taught in the nursery class. She loved reading, spending time on the lake with her husband, watching romantic movies, and cleaning.
Loretta is survived by her children, 12 grandchildren, 12 great grandchildren, her brothers Robert (Janie) Hansen of Ashland City, TN and James Hansen of Jacksonville, AR, brother-in-law Bob Winkler and sister-in-law Janet Hansen of AR, and many nieces, nephews. She was preceded in death by her parents, her husband Charles Saunders Sr., her sisters Elizabeth (Beth) Winkler and Linda Staver of Jacksonville, AR, and her brother Eugene B. Hansen Jr. of Arkansas.
Visitation will be from 4:00 to 6:00 p.m. Saturday, July 9, 2022 at The Funeral Chapel of Powell and Deckard 3000 E. Third Street Bloomington, Indiana. Funeral services will follow at 6:00 p.m. Saturday at The Funeral Chapel.
Contributions may be made to Indiana University Bloomington Hospice. Onlline condolences may be made at www.thefuneralchapel.net