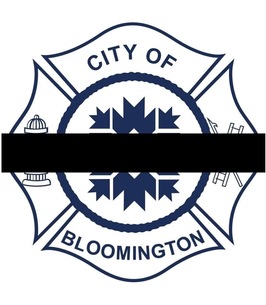 Robert Lee Loviscek Jr, 53, of Bloomington, passed away unexpectedly on Tuesday, July 5, 2022 while visiting his family’s lake house in Monticello.

Rob was born April 23, 1969 in Indianapolis, IN and was the son of Robert Lee Loviscek Sr. and Ellen Marie “Lynn” (Kavanagh) Albrecht. Rob was a 1987 graduate of Cardinal Ritter High School and joined the United States Marines after graduation. Rob was a proud Veteran and served his country for over 10 years. After his discharge from the Marines, Rob began his extensive career as a Firefighter which included working at the Speedway Indiana Fire Department and for the last 20 years with Bloomington Fire Department. Rob held many titles of Sergeant, Union President Local 586, and was currently the Departments Logistics Officer.
Rob served his community with pride and honor.

Rob was also a member of the American Legion Post 18, Elks Lodge #446, he organized retiree’s dinners, funerals and fundraisers and would be the first one to show up to help with anything. Rob had also spent the last several years working with The Funeral Chapel where he was still able to help families in a time of need.

Rob was preceded in death by his grandparents, Louis Matthew Loviscek, and Pauline Loviscek, Michael Kavanagh and Bernetta Kavanagh; step father, Jay Albrecht; and father and mother in law, Mike and Emma Gooldy.

Services for Rob will be 11am Wednesday, July 13 at the Ivy Tech Auditorium (Shreve Hall), 200 Daniels Way, Bloomington, IN 47404. Rev. Harold Godsey will preside and burial will follow at Valhalla Memory Gardens.
Visitation will be on Tuesday, July 12, 2022 from 2-8 pm at The Funeral Chapel of Powell and Deckard 3000 E. Third St. Bloomington.

In lieu of flowers donations may be made to Hit’n It Hard from the Yard (H.I.H.F.T.Y) or the Monroe County Veteran’s Honor Guard in care of the funeral home.

Memories of Rob and condolences to his family may be given at www.thefuneralchapel.net.