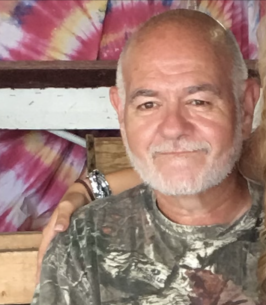 Elmer “Elmo” Duane Halcomb passed away suddenly Monday, July 11, 2022.
Born on August 14, 1955, in Columbus, Indiana, he was the son of the late Linville Halcomb and surviving Imogene Halcomb (Sexton).

Elmer has many nieces and nephews who adored Uncle Elmo. He always had a smile and a funny story. Elmer was available and willing to help them with fishing, 4H projects and whatever was needed. They will miss him greatly.

Elmer worked as a mechanic, for Caterpillar and then 30 years for GE. He then retired. Elmer served as a Children’s Pastor, Youth Leader, Mascot Salvation Dalmatian, 4-H leader For Monroe County Rabbit Club and Sportfishing Club. Coach of Boys/Girls Club Soccer, Coach for AAU wrestling, Coach of Smithville Baseball. Elmer was a selfless person a man of little wants or needs. He would always put his children and other children first. Elmer had a heart to serve God’s people.