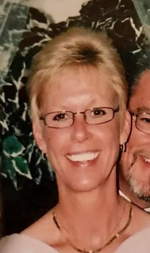 “Catch your dreams before they slip away…”
- Rolling Stones

Sherry Lynn Slessinger (Age 62) passed away mid-morning on Sunday July 10, 2022. She lived her final days surrounded by her son Blayne, family, and friends at peace.

A wise person once said that if you finish your life with five great friends who would do anything to help you, consider yourself well off.
If that is true, then Sherry was wealthy beyond anyone’s imagination. She had an amazing way of touching those she met with a smile,
kind word, or immediate friendship.

Sherry was born and raised in Bedford by her parents Deloris and James Hornocker. She grew up alongside her sister Karen and late
brother Jim. Following high school Sherry moved to Bloomington where she began working at General Electric. While there she would meet a quick-witted man with a big heart named Mick. They were lovingly married for 33 years until his passing in March of 2021. At General Electric she would make life-long friendships with people who would become family to her as they journeyed side by side through the ups and downs of life. She learned to lean on those friends, as they leaned on her. These relationships carried on long after she retired after 35 years at General Electric Bloomington. As she entered retirement old doors closed and new ones opened allowing her to put all of her heart, soul, and energy into her family and friends.

Of all her joys in life being the Mother of Blayne was easily the biggest. Always there for him, he was the pride of her life and she loved to tell others about him and his activities. She cherished the times traveling and watching Blayne and Brad together. When Blayne met the love of his life, Emily, she was overjoyed to welcome a daughter-in-law and her parents Brad and Angi into the family. Their wedding day was one of her most favorite memories she carried close to her heart.

“My family and friends are the best thing I’ve known. Through the eye of the needle I’ll carry them home.”
- John Mellencamp

“They say one time around is all you get / But I’m still dancin’ so you lost your bet!”
- Aerosmith

Sherry had a great love for family, friends, animals, The Rolling Stones, Aerosmith, Mellencamp and a immaculately kept house. So, as you move though your week turn it up a little bit as you drive down road, hug the ones you love a little tighter, give a pet a second chance, and leave the world better than you found it. It is certain Sherry did.