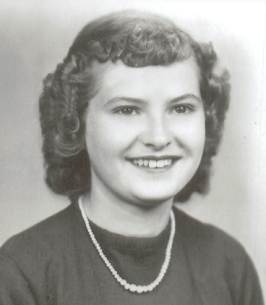 Verlia Fay Eads also known as "Mem" to her family, passed away peacefully at her home with her family by her side on Saturday July 23, 2022 at the age of 85 years old. She was born October 25, 1936 in Lawrence County to Marshall and Ruby (Fleetwood) Callahan. She was the oldest of 10 siblings. On October 14, 1955 she married the love of her life Kenneth Ray Eads. They had a wonderful marriage of 49 years, her husband passed on August 5, 2005.
Being the oldest of 10 she learned at a very young age the skills of being a good mother and helper to her mother. She was an excellent seamstress and always talked about how she had to sew her families’ clothes. She would sew for anyone that would ask and never charged a penny. She made everything from Barbie doll clothes, wedding apparel, she enjoyed crocheting and quilting. Everybody knew if you needed something fixed Mem could do it. She graduated from Smithville High School in 1954. During her senior year she worked downtown at Wicks Department Store. She graduated with outstanding character and achievement and was elected membership into the National Beta Club. After graduation she worked at Sarkes Tarizan and always told stories of how she learned to drive on the “3” speed on the column.
She loved to cook and everyone loved her homemade noodles, red velvet cake and apple turnovers. She loved hosting her large extended family for the holidays and Sunday dinners; everyone was always welcome.
She supported her husband in his many business adventures. They owned and operated Performance Unlimited and Bloomington Ready Mix. When her husband was self-employed as a building contractor she helped him with the painting, staining and did all the bookkeeping. In 1969 they started Laminated Tops, a counter top business out of a small garage behind their house. She did all the bookkeeping. The business was very successful for them, and continues today under new ownership. The owned several farms and were partners in Clear Creek Estates and Farmers Field subdivisions.
A loving, soft-spoken, generous and genuine would describe Mem. She would give the shirt off her back to help anyone. You would never hear her speak a mean word from her mouth. If she heard one from the grandkids a bar of soap and a good mouth washing took care of that.
Fay was the loving mother to two daughters, Karen Sue (Gregory) Young and Sharon Renee (friend David Holt) Newsome. She was blessed with four grandchildren, Jacob (Sarah Jerusha) Young, Joshua (Jana) Young, Jessica Newsome, Craig Newsome (companion Nicole Wiegl and her sons Cooper and Jackson); and eight great-grandchildren, Oliver Young, Owen Young, Ruby Young, Emmitt Young, Sawyer Young, Mabel Young, Bentley Head, and Braxton Head. She was especially proud that her two great-granddaughters were named in honor of her, her mother and mother-in-law Mabel Fay and Ruby Lue. Emmitt Ray was named after her husband Kenneth Ray. Her greatest joy was watching her grandchildren and great-grandchildren showing 4-H animals at the Monroe County Fair and watching their baseball or basketball games. Two of her favorite sayings to the great-grandchildren were “If you don’t behave I’m going to hang you up by your toes,” and, when you left her house, she would always say “I’ll see you in the funny papers.”
Fay was a God-fearing woman, putting God first in all things. She was of the Apostolic faith all her life. When she was able she attended church every time the church doors were open and was a prayer warrior. She taught many years as a Sunday School and Bible School Teacher and was very active in church activities.
She is survived by her 2 daughters, 4 grandchildren and 8 great-grandchildren. She is also survived by her brother Raymond (Susie) Callahan of Oolitic, sisters Thelma Flynn, Mary Duncan, Kay Bland, Fern Sturgis (Bob Snow), Ruthie (Marty) Barrow, and Loretta (Jodie) Richardson, as well as many nieces, nephews, and great-nieces and –nephews.
She was preceded in death by her husband Kenneth R. Eads, in-laws Ruby and Clifford Eads, parents Ruby and Marshall Callahan, brother Marion Callahan, and sister Eunice May Tate. She greatly loved her husband’s family and was preceded in death by Velma and Richard Robertson, Roy and Toots Hedrick, Dale and Verna Deckard, and Janice and Wendell Rogers.
Mem’s love and generosity will be remembered forever. The family has peace in knowing that after 17 years of being separated Mem (Fay) and Papaw (Kenneth) will once again be reunited.
The family would like to extend our thanks to those who helped during Fay’s difficult days. Very special thanks to Heart to Heart Hospice, Kayley Schertzer, Danielle Sciscoe, Tiffany Hanner, Dee Myers, her sisters Mary Duncan and Thelma Flynn and nieces Theresa Sears and Lisa Tate. They were with her day in and out, their love and dedication is greatly appreciated.
A visitation will be held at The Funeral Chapel on Wednesday July 27 from 2-7 PM followed immediately by an in-house service. Nephew Rev. Judd Sears, Grandson Jacob Young, Rev. Fred Stanger and Rev. Bruce Bond will officiate the service. The committal service will begin from The Funeral Chapel on Thursday July 28 at 10 AM. In lieu of flowers, the family suggest memorial contributions be made to the Apostolic Church of Jesus Christ, 3510 W. SR 46, Bloomington, IN 47404.