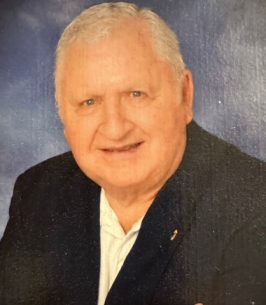 Robert “Bob” Karaffa, age 90, of Bloomington, Indiana found eternal rest on Monday, October 24, 2022, at IU Health Hospice House in Bloomington, with his family at his side. He was born on August 14, 1932, in Toronto, Ohio to Alex and Rose (Franczek) Karaffa.
He is survived by his daughters, Stephanie Stantz of Tulsa, Ok. and Victoria Karaffa of The Villages, Fla.; sons Robert Karaffa, II, of Decatur, Ga., Paul Karaffa and spouse Marni, Michael Karaffa and spouse Yvette of Bloomington, five grandchildren and one great grandchild.
Bob retired after a stellar 20-year career as an officer and pilot in the United States Air Force, and retired after 20 years as an administrator at Indiana University. Active in his local communities, officiating sports, singing in his church choirs, he was a member of the American Legion, served as Grand Knight of his local Knights of Columbus council, and was a committed husband and father. Raised in the Byzantine and Roman Catholic traditions, he was faithful to his church.
Bob was a lover of music, was an accomplished singer, harmonica and ukulele player, and loved polkas and big band music.
Bob was preceded in death by his father Alex, mother Rose, brother John, first wife, Phyllis Jean (Sutherin), and second wife Maryann (Hanuscin).
Visitation for Bob will be held Saturday, October 29, 2022, from 10 A.M. until noon at The Funeral Chapel of Powell and Deckard, 3000 E. Third St. Bloomington, Indiana. Services will begin at 12 P.M. Saturday, October 29, 2022, at St. Charles Borromeo Church, 2222 E. Third St. Bloomington, Indiana with Father Tom Kovatch officiating. Entombment will follow at Valhalla Memory Gardens.