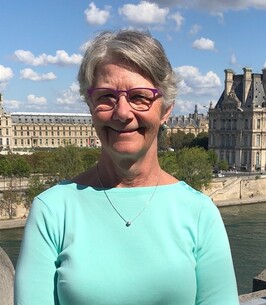 Margie was a dedicated and respected law librarian for more than 40 years. She started her career at a
law firm library in Denver, before moving to the library at the National Center for State Courts, followed
by academic law libraries at Cornell University, the University of Minnesota, and St. Thomas University.
The last ten years of her professional life were spent as Executive Director of the Legal Information
Preservation Alliance. Throughout her career she was a member of the American Association of Law
Libraries (AALL), serving as that association’s president in 1999-2000. She received dozens of AALL
honors including being inducted into the AALL Hall of Fame in 2014. She was awarded the association’s
highest honor in 2018, when she was presented the Marian Gould Gallagher Distinguished Service
Award. A complete listing of her AALL achievements can be viewed at: https://perma.cc/RMU7-EA5P

Even more than her distinguished career, it was her family she cherished and was most proud of. Her
sisters, Barbara Johnson (Jan) and Sarah Andrew (Steve), were the family anchors that kept her attached
to Green Bay. Her daughters Emily Kuisle (Patrick) and Sarah Axtmann (Grace), of the Twin Cities, and
grandchildren Virginia, Whitney, Lucy, Paul, and Mara were the embers that lit her heart. Margie also
found great happiness spending time with her husband Dick, traveling the world together, visiting dear
friends, listening to jazz, collecting pottery, reading, and cheering on the Green Bay Packers. Additional
survivors include numerous nieces and nephews, cousins, her first husband Robert Axtmann, and in
Bloomington her mother-in-law Ann Vaughan, and sister-in-law Susan Vaughan, step-daughter Melissa Overton, and step-grandchild Eden Waters.

Local arrangement handled by The Funeral Chapel in Bloomington. Memorial service to be held at a later
date in the Twin Cities. Memorial contributions can be made to the AALL George A. Strait Minority
Scholarship at: https://perma.cc/RNM9-TELG